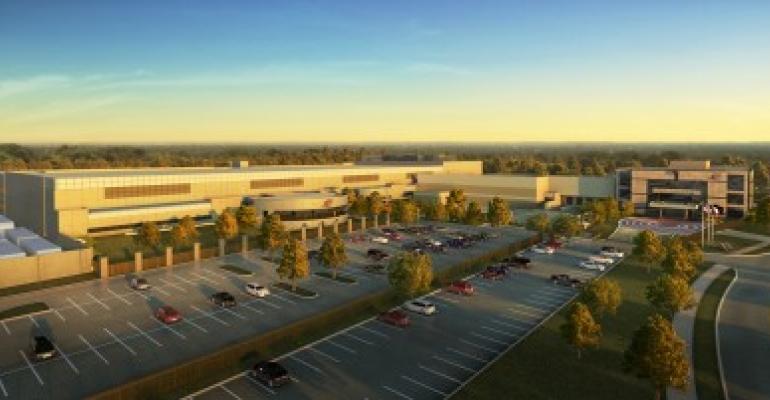 QTS Realty Trust is officially opening its latest mega data center in the Dallas-Fort Worth market this week. The facility is a retrofitted former semiconductor plant in Los Colinas, between Dallas and Fort Worth, the company bought in early 2013. Extensive work has gone into repurposing it into a 700,000-square-foot, 140-megawatt behemoth of a data center.

QTS pre-sold about 26,000 square feet in the facility before opening the doors. This is from many existing customers on both coasts looking for a location in the middle of the country, company officials said.

Rich in fiber-optic infrastructure, the Dallas-Fort Worth area is a key Internet hub, which makes it a desirable location to colocate in. It also has power rates that are lower than the national average.

QTS continues to diversify its regional mix with the new data center. Once primarily known for its massive facility in Atlanta, it's success was too tied up in that market alone. But recently, the provider has been diversifying its footprint using the same model in various key markets.

“Our mega data center strategy combined with our redevelopment strategy has us excited by this asset,” said QTS Chief Operating Officer, Operations and Development, Jim Reinhart. “It’s an infrastructure-rich facility with great power and fiber. It’s also possible to double the size to 1.4 million square feet down the road with enough critical power to support.”

The company likes to acquire extremely large buildings with good power infrastructure for pennies on the dollar and refurbish them as premier data centers. In addition to Dallas, it bought the former Sun-Times Plant in Chicago and McGraw Hill’s former New Jersey data center.

It entered northern California in 2013 with the acquisition of Herakles and its 92,000-square-foot facility in Sacramento.

Differentiating in a crowded market

The Dallas data center market is diverse. In downtown Dallas there is the Infomart (Now Infomart Data Centers, following merger with Fortune Data Centers). Most providers are just north of Dallas, while the new QTS facility just north of them.

Other providers in the wider DFW metro include Digital Realty, CyrusOne, Equinix, T5, Databank, retail colocation startup Patronus, and several others. Cloud providers Rackspace and IBM’s SoftLayer both have roots in the area.

QTS leadership hopes the sheer size of the data center and broad product capabilities will be two points of differentiation for it in the crowded Dallas data center market. Resting between Dallas and Fort Worth and close to DFW airport, it will appeal to both major business hubs, they said.

QTS offers clients hybrid environments. The product portfolio is called the 3 Cs, comprising of everything from cloud and managed services to wholesale deals over 10 megawatts.

“Customers don’t have a one size that fits all when it comes to infrastructure,” said Dan Bennewitz, QTS chief operating officer, sales and marketing. “We can accommodate any need. Customers can see the pathway to whatever their business model has in store.”

A separate organization devoted to compliance allows it to go after specific verticals like healthcare and financials. QTS is currently in the FedRAMP certification process which will increase appeal in the federal space, helping both Dallas and its Richmond facility in particular.