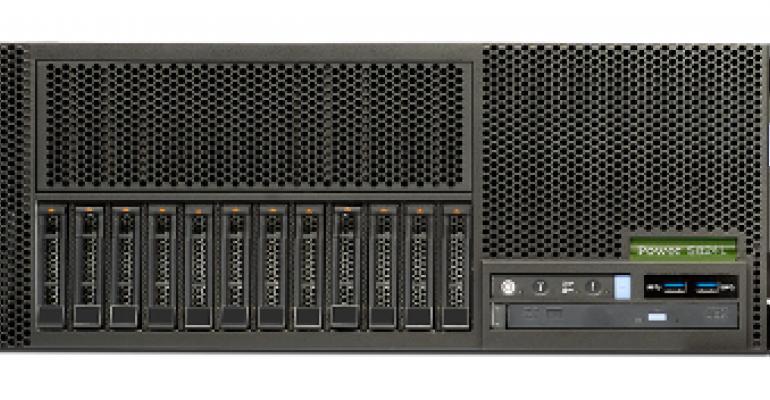 The new IBM Power S824L runs on IBM&#8217;s POWER8 CPUs and NVIDIA GPUs and is based on the OpenPOWER stack. (Image: IBM)
Blades

IBM is doubling down on its open server innovation strategy through the OpenPOWER Foundation. The company announced a new system incorporating OpenPOWER to better address Big Data challenges. The company is aiming squarely at Intel's stranglehold on the server processor market, claiming it has achieved better price performance than comparable Intel-based servers.

IBM, Google, NVIDIA, Mellanox and Tyan founded the OpenPOWER Foundation in 2013. It has attracted 59 members to date, all reportedly working together to leverage POWER's newly opened server architecture. The momentum is strong. The org has grown fivefold in nine months.

IBM announced a $3 billion investment in research and development of processor technologies in July. The investment indicated IBM had no intention of abandoning its chip business altogether, despite the sale of x86 server business to Lenovo. There were news reports that cited anonymous sources saying Big Blue was considering a sell-off of the processor business.

But IBM has a long way to go if it wants to suck meaningful market share from Intel, which powers majority of the world's servers. Commenting on July's announcement, an Intel spokesperson told us Intel was spending $10 billion a year on processor R&D.

IBM is investing in technology development rather than manufacturing. It licenses the POWER architecture to others, but is itself a chip technology licensee. IBM licensed processor architecture from UK’s ARM Holdings last year, saying it would use it to build custom chips for clients.

This is arguably a battle of business models -- at least IBM is positioning it that way -- closed and proprietary versus open. But IBM's approach with POWER isn't open in the same sense open source software is open. It has made POWER server technology open through the foundation, but it sells licenses for the IP. It means companies are free to innovate on the tech, but they still have to pay the owner.

The strategy behind selling x86 business to Lenovo is now clearer. IBM is putting its weight behind OpenPOWER technology instead of x86 server manufacturing and waging war against leader Intel with the "open" angle.

“Our open innovation business model and approach to OpenPOWER will disrupt technology providers that offer closed, proprietary solutions produced within the walls of one company,” said Doug Balog, general manager of Power Systems at the IBM Systems and Technology Group.

The new IBM Power S824L servers are built on IBM’s POWER8 processor, which the vendor says is optimized for Big Data workloads. Built on the OpenPOWER stack, the systems provide the ability to run data-intensive tasks on POWER8 processors while offloading other compute-intensive workloads to GPU accelerators.

Future versions of IBM Power Systems will feature NVIDIA NVLink technology, eliminating the need to transfer data between the CPU and GPUs over the PCI Express interface. This will enable NVIDIA GPUs to access IBM POWER CPU memory at its full bandwidth, improving performance for numerous enterprise applications. These systems are expected to be available beginning in 2016.

The IBM x86 server deal with Lenovo was a long time in the making, IBM first announcing intentions to sell in January. The deal positioned IBM to make its big OpenPOWER push. Lenovo was also a victor, becoming the third-biggest x86 server provider worldwide and the leader on the key turf that is China.

“This divestiture allows IBM to focus on system and software innovations that bring new kinds of value to strategic areas of our business, such as cognitive computing, Big Data and cloud,” said Steve Mills, senior vice president and group executive, IBM Software and Systems.