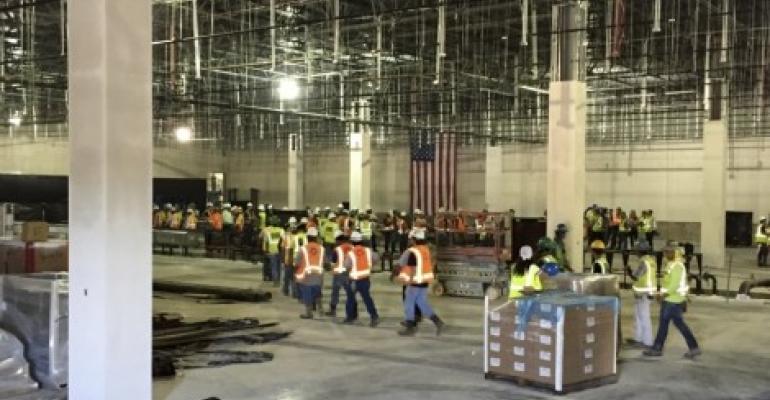 A BBQ held during the &#8220;topping off&#8221; party last week at the upcoming Houston 2 facility (source: Data Foundry)
Colocation

Every size, from one rack to several megawatts, will be available at the 350,000 sq ft Houston 2 facility

Data Foundry held a "topping off" party last week and provided a look into progress at its upcoming Houston data center. Construction of the 350,000 square foot facility is on track: the roof is on; the generators are in. The company will start tours very soon.

In builder jargon, "topping off" a building means placing the last beam on top of a structure during construction.

The data center will be the company’s largest greenfield project to date. Construction crews broke ground at the site in April. Houston 2 resides on an 18-acre tract of land the company purchased in 2013.

The new data center is modeled after Texas 1 built in Austin in 2011, which has been successful for the company. “Austin was a very small data center market. We created a much larger market with large-scale product,” said Edward Henigin, CTO, Data Foundry.

Houston is a much bigger market than Austin and the company reports solid interest. Other providers in Houston include CyrusOne and SoftLayer (IBM), as well as new wholesale entrant Skybox (which has partnered with T5 for data center management ). Houston is home to a total of about 30 data centers. But market watchers say supply is tight, and the large footprints of recent deals in the energy sector suggest continuing demand.

Data Foundry is part of the larger trend of blurring lines between wholesale and retail colocation. Houston 2 will serve requirements ranging from single-cabinet to multi-megawatt deployments.

“The retail customer, you move in, everything works,” Henigin said. “It comes out on time every time, like Starbucks. We have that level of finish. We can sell a metered deal with the wholesale market or we can sell individual racks.”

Henigin said the provider's experience and expertise were real assets to customers. “It is a balance between providing a high level of security while at the same time providing those creature comforts in the data center,” he said. “People are more productive when they have lower stress.”