Individual services now live in Linux containers; a single cloud can scale to hundreds of nodes

Rackspace has redesigned the fundamental architecture of OpenStack private clouds it deploys for its customers using Icehouse, the latest release of the open source cloud system. The changes, the company claims, make it more stable and scalable.

The provider is backing those claims with a new 99.99 percent OpenStack API uptime guarantee – a Rackspace first.

OpenStack is the most widely used non-proprietary cloud architecture, and Rackspace has extensive technical expertise in the open source system. The company was involved in its creation, and its public cloud is one of the world’s largest production deployments of OpenStack.

Rackspace has been offering private cloud services for two years. The company can deploy an OpenStack private cloud in the customer’s own data center, host it in one of its own nine data centers or both. It emphasizes its ability to mix and match dedicated servers, private and public cloud resources in hybrid deployments.

With the latest version of its private cloud, Rackspace has introduced Linux containers to OpenStack cloud management. Different elements of the OpenStack suite – Nova for compute, Neutron for networking or Keystone for identity management – are packaged in LXC containers (the acronym stands for LinuX Containers) and can scale individually.

This means a customer that needs more network capacity in their cloud can scale the Neutron component without scaling anything else, Bryan Thompson, who leads product management for private cloud at Rackspace, said.

With the release of Ubuntu 14.04 in April, the LXC technology matured into a stable 1.0 release, which made it possible for Rackspace to use it to build a commercial offering, he explained.

Another major change is a switch from a two-node control plane to a four-node one, making the system a lot more stable at scale.

The two-node plane did not scale well, forcing Rackspace to build and interconnect multiple clouds with multiple control planes for some of the larger deployments, Thompson explained.

In the new four-node setup, data is replicated between three of the nodes in an active-active-active topology, with the fourth one acting as a dedicated logging server. The change enables massive scalability within a single cloud, he said. 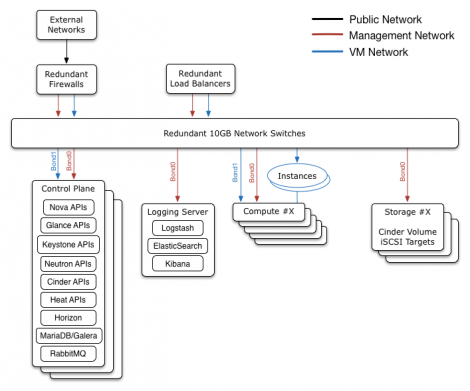 Back to hardware load balancers and firewalls

With the new release Rackspace also decided to get away from Open vSwitch, the open source software defined network platform used as a plug-in for Neutron (the network element of OpenStack), conceding it was not quite ready for production and high-volume workloads. The team switched to traditional hardware load balancers and firewalls, still leveraging Neutron SDN capabilities within customer clouds.

These and other changes have enabled Rackspace to offer “four nines” API Service Level Agreements for each of the core OpenStack services. “The nature of OpenStack, the types of workloads that it attracts … is really about that API interface,” Thompson said.

Single-cloud scalability across hundreds of nodes

The new release of Rackspace Private Cloud is now available in the company’s U.S. data centers and will roll out in its overseas facilities in October.

Last he checked, about 60 percent of the company’s private cloud customers had the provider host their clouds, the rest using the on-premises deployment option, but that ratio fluctuates, Thompson said.

The company has customers with five-to-10-node private cloud deployments, as well as customers running as many as 700 nodes. Those several-hundred-node deployments, however, consisted of multiple clouds because of the technological limitations of the previous versions of the architecture. The latest release takes care of that problem.

Customers are naturally incentivized to transition to the new version of OpenStack private cloud, but, realizing the transition may be quite invasive, Rackspace is not forcing all of its existing private cloud customers to do it immediately, planning to continue support for Havana, the previous OpenStack release, for more than one year, Thompson said.