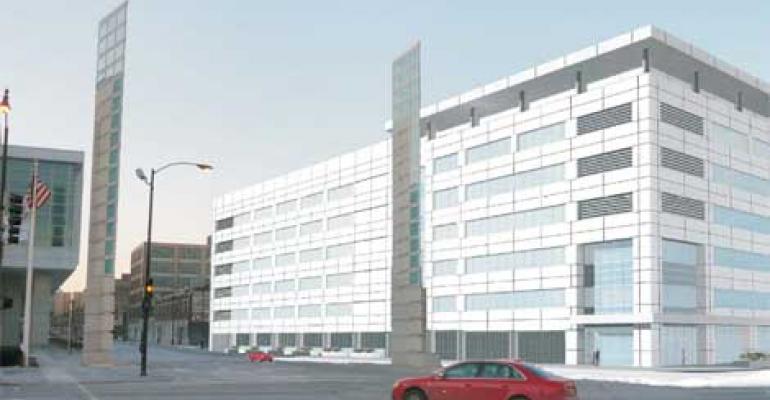 This was the original design concept for a six-story, 300,000-square-foot data center in Chicago proposed by McHugh Construction in 2009. The data center is back on track again.
Business

After scrapping original data center plans in favor of a hotel, the developer resurrects original plan in a different, but nearby, location.

A few years ago, McHugh Construction saw a golden opportunity in downtown Chicago. There was a lack of data center supply and McHugh owned a key property in close proximity to the major carrier hotel 350 East Cermak. The company pitched a brand new, 350,000-square-foot data center to city officials who approved the plan.

It was heartbreaking when city government decided it had different plans for the property. Two years ago, McHugh came to an agreement with the city to build a one-block-long hotel to fit into the plan, meeting the city’s requirements for room count and hotel.

But the company found a way to build a data center in the area anyway. The planned data center development has been moved to South Indiana Avenue, just 100 feet south of the originally planned location, Larry Graiber, who oversees data center business development at McHugh, told Data Center Knowledge.

The new site changed little in the original data center plans. "This is the perfect opportunity for a purpose-built rather than retrofitted data center," Graiber said. "Things lined up well. [The 350 E. Cermak facility] is full for the most part and downtown supply is tight. Ninety-eight percent of the data center plan has stayed the same. The size is the same, consisting of 350,000 square feet on 6.5 floors. The other half-floor of the seventh floor consists of the mechanical infrastructure."

The data center will have 40 megawatts coming in from three different feeders. The only change to plans is the company now has to incorporate the historic Rambler building for parking.  Everything seems to be settled with the city, and McHugh hopes to break ground in November.

Graiber is a vet of the industry, originally brought to McHugh from Latisys. He helped construct Latisys’ Oakbrook facility in suburban Chicago.

He was vice president of the Stargate data center, running it before acquisition by Latisys (known as Managed Data Holdings at the time). Stargate had been known as a web hosting brand and was not well known in colocation. “We had to engineer the facility so customers would be impressed with the quality of the data center,” Graiber said.

McHugh reached out to Graiber for his expertise as its interest in the mission critical facility space continued to grow. “McHugh has been involved in construction for 100 years,” said Graiber. “We built the CME (Chicago Mercantile Exchange) trading floor 20 years ago, We’ve done the Trump hotel and other various projects. The McHugh family had an interest in mission critical facilities for a long time.”

Chicago continues to be a strong market

Downtown Chicago and the suburbs are two distinct markets.  The suburns used to be primarily used for disaster recovery purposes, but a tight supply started forcing production environments outside the city proper. The suburbs have become more production-friendly over the years.

Both downtown and the suburbs have seen healthy and stable pricing, with locations downtown going for a premium.

Digital Realty’s development in Franklin Park sits right in the middle of downtown and the suburbs. It has done really well, selling out the first phase completely, signing multiple tenants.

There is also a few big downtown projects in the area that are in the pipeline. In addition to McHugh, Centerpoint is constructing a large data center close to 350 E. Cermak.  QTS has acquired the Chicago Sun-Times plant to turn it into a data center. There is also Ascent Corp. and existing providers Digital Capital and Server Farm Realty.