Open-IX: Netflix and Google’s Plan to Break Out of Equinix’s Gilded Cages

As AMS-IX Bay Area launches in San Francisco, Internet giants now have a peering option outside of Equinix data centers

Before the early 2000s, when the Internet was still a Wild West, if you were an Internet service provider and wanted to peer (exchange traffic) with another service provider, you had to colocate your gear inside one of the Network Access Point facilities, or NAPs. Each of those facilities was controlled by a specific carrier, and if you wanted to colocate in one of them, you had to buy upstream connectivity services from that carrier.

Naturally, the ISPs were not very happy with the model, and companies like Equinix and CRG West (now CoreSite) saw that there was a need for carrier-neutral data centers. They started providing these data centers, establishing Internet exchanges inside them and providing exchange access as part of their service offerings.

It may have seemed like great democratization of the Internet, but no-one anticipated what the carrier-neutral data center providers did next, Job Witteman, CEO and one of the founders of AMS-IX, the company that operates the Amsterdam Internet Exchange, said. “They were building kind of a fence around that area (the Internet exchanges), and they only offered that service to their own customer base and would not allow any outsiders in.”

These walled gardens grew and today are the largest Internet exchanges in the U.S. There is a handful of data center providers controlling all key traffic exchange points in the country, and of those, Equinix controls the most. The company solidified its position when it acquired Switch and Data in 2010, gaining control of more exchanges around the country.

Just as the early carrier-neutral data centers jumped at the opportunity to provide alternatives to carrier-controlled exchange points more than a decade ago, companies behind the Open-IX organization have created an alternative to today’s exchanges that are carrier-neutral but not data center provider-neutral.

Internet companies that move unimaginable volumes of traffic wanted alternatives to Equinix-controlled exchanges. Google, Netflix and Akamai, among others, founded the non-profit so they could have peering options beyond Equinix data centers, Witteman said, because if you want to peer through one of Equinix’s Internet exchanges, you have to be in one of Equinix’s data centers.

“If you’re inside Equinix and you can reach anyone who’s also inside Equinix over the exchange, sure you’re happy, but you cannot reach all the others that are in different data centers,” Witteman said. “For Netflix that means they have to pay upstream to get to customers who are not in the Equinix data center, or they have to build out in the second data center as well.”

First we take Manhattan, then we take … San Francisco (Berlin’s been taken)

Two European exchange operators, AMS-IX and LINX (operator of the London Internet Exchange) have set up shop this year in the U.S. as a result of Open-IX. Not quite following battle plan in the Leonard Cohen song, they started on the east coast, in the New York and D.C. metros, and earlier this month, one of them expanded to the west coast. A third European operator, DE-CIX, entered the U.S. market as well, but separately from Open-IX.

An AMS-IX Bay Area Internet exchange went live in Digital Realty Trust’s data center at 365 Main Street in San Francisco in early September. As of last week, when we spoke with Witteman, AMS-IX Bay Area had written commitments from a handful of parties and verbal commitments from about 15 more to peer in San Francisco. In the New York metro, where AMS-IX exchange lives in three Manhattan data centers and one facility in New Jersey, there were seven customers up and running and close to 30 had signed contracts, Witteman said. 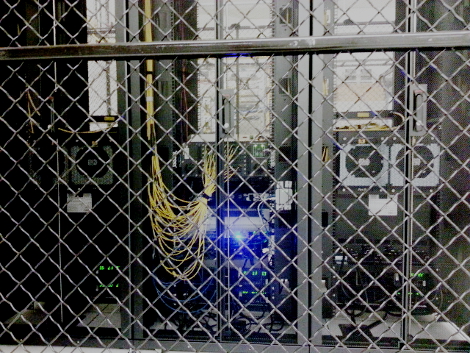 AMS-IX Bay Area equipment inside a cage in one of the meet-me rooms at 365 Main includes two Brocade Ethernet switches and an optical cross-connect made by a Hayward, California-based company called Glimmerglass Cyber Solutions. The set-up costs about $200,000 and is the same across all AMS-IX exchanges around the world, according to AMS-IX CEO Job Witteman.

AMS-IX, its U.S. and two other subsidiaries (there is one in Kenya and another one in Curaçao) are all operated as non-profit organizations. AMS-IX, the parent company, is owned by exchange members but it doesn’t pay dividends. It spends its profits primarily on lowering the rates and on projects like international expansion.

Digital’s massive colo at 365 Main is the only Open-IX-certified data center in San Francisco at the moment and one of two certified facilities in the Bay Area. The other one is one is in Santa Clara and belongs to Vantage. An AMS-IX exchange can be in multiple data centers within a single metro. If it were to extend beyond metro borders, it would start competing with its customers, Witteman explained.

The beauty of the model is it is not confined to one data center or one data center provider in a metro. AMS-IX New York is in data centers operated by Digital Realty, Sabey, DuPont Fabros and the group of partners that owns the 325 Hudson building in Manhattan. If you’re peering on the exchange in one of the buildings, you can peer with companies in any of the other ones.

AMS-IX Bay Area is also not going to be limited to 365 Main. Within the next several months it will extend to CoreSite’s San Jose data center at 55 South Market, Witteman said. Yes, CoreSite. Between CoreSite and Equinix, the latter was “braver” in the game of chicken with Open-IX founders, he said. Two CoreSite employees are registered Open-IX members. Neither AMS-IX Bay Area nor CoreSite’s San Jose facility are Open-IX certified yet.

AMS-IX is after the same big users in the Bay Area that peer in the 12 data centers the Amsterdam Internet Exchange is spread across in the Netherlands, Witteman said, referring to them as the “usual suspects.” These are the likes of Netflix, Google, Facebook, Microsoft, Twitter, Akamai and LinkedIn, among others.

It is easy to see why Equinix would not be into the idea of Open-IX. The company’s business model relies heavily on the “ecosystems” of companies it hosts in its data centers. Access to these ecosystems is a big differentiator for Equinix and is the main thing that makes its data centers so attractive.

Hosting an Internet exchange, especially a well-populated one, is a major selling point for data center providers, which explains the huge amount of Open-IX-certified data centers compared to the amount of certified exchanges. There are about 20 facilities, all around the U.S., that have been certified, and only two exchanges – AMS-IX NY and LINX NoVa (a Northern Virginia exchange operated by a subsidiary of the company that operates the London Stock Exchange).

John Sarkis, general manager of colocation and connectivity at Digital Realty, said the company has about 250 customers in the Bay Area, each of whom now have access to the AMS-IX exchange. Not that selling space at 365 Main is difficult (the facility is about 80-percent full, according to Asa Donough, director of property operations at the building), but Sarkis still nodded to Bay Area rivalry with Equinix. “This is an alternative exchange to Equinix,” he said. “I’d like to highlight that. There are options now.”