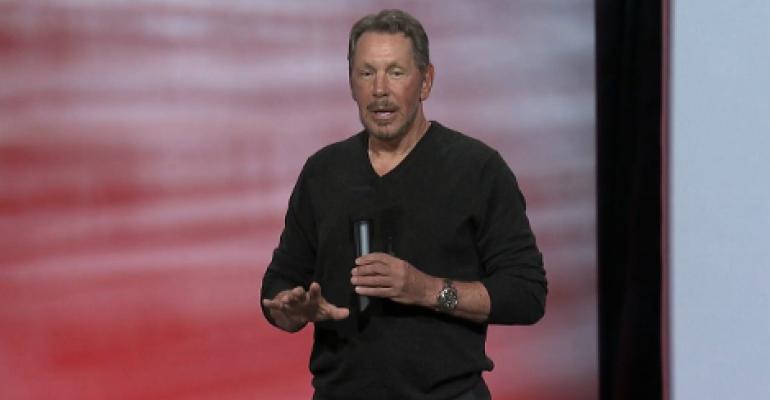 Catz, Hurd, Ellison promise to stay the course to try and conquer the enterprise cloud market

Oracle executives spent a good chunk of the time allotted for Thursday’s quarterly earnings call – which followed the announcement that Larry Ellison was stepping down as the company’s CEO – trying to convince analysts that nothing will change at Oracle in practice, and that Oracle cloud will eventually conquer the world.

“There will actually be no changes,” Safra Catz, Oracle’s former CFO and one of its two new CEOs, said. “No changes whatsoever.”

While she will no longer be referred to as CFO, her team will continue reporting to her as they have been. Her title is now CEO and principal financial officer, and the company will not be looking for a replacement.

“We will not be hiring CFO and my team will continue reporting to me,” Catz said. The functions that have and will continue to report to her are manufacturing, finance and legal.

Former HP CEO Mark Hurd will share the Oracle CEO throne with Catz. This will be the first time anyone but Ellison will have sat in it.

Ellison took Hurd on as company president after Hurd’s ouster from HP in 2010 amid a scandal related to allegations of sexual harassment and misuse of company resources, which were later disproven.

While his title has changed, Hurd’s responsibilities and direct reports will also remain the same. All sales, service and vertical industry business units will continue to report to Hurd.

Ellison: “You should be so lucky. I’m staying on the calls.”

Ellison, whose title has changed to CTO and executive chairman of the board, will still be overseeing all software and hardware engineering functions and will even continue participating in quarterly earnings calls. “You should be so lucky,” he said, replying to a comment from an analyst who said he will miss Ellison on the calls. “I’m staying on the calls.”

None of the execs actually gave a clear explanation for the title changes. The company’s stock fell more than 2 percent in afterhours trading following the announcement.

As if to illustrate how little will change, Ellison made a new product announcement on the call, held in the run-up to Oracle Open World in late September, early October. Ellison announcing new products a week or so before the massive San Francisco conference has become an annual tradition of his.

This time around, he announced that the company will be rolling out a new cloud database service. The pitch is that customers will be able to move their applications from their own data centers into the Oracle cloud “with a push of a button.”

“We’re focused on becoming number one in the cloud, being bigger than Salesforce in the cloud,” Ellison said, referring to one of the world’s largest providers of business software services in the cloud.

Cloud services business grows, but it’s only 4% of revenue

Oracle cloud services business grew in the recently completed first quarter of fiscal 2015, but it remains a very small portion of its overall business, which still very much relies on on-premises software license sales and updates and support for those licensees.

The company’s total revenue for the quarter was $8.6 billion, up 3 percent year over year. Its net income was $2.2 billion, unchanged compared to the first quarter of fiscal 2014.

“Q1 is a seasonally smaller quarter, which can mean more volatility in our results, and that’s what we saw in this quarter,” Catz said. The company’s earnings per share for the quarter were $0.48, slightly below the lower end of its previously forecasted range of $0.49 to $0.53.

Execs optimistic about shift to the cloud

But the company expects to benefit from the shift nevertheless, as it expects to provide the cloud services those users will turn to. Instead of making money on updates and support, Oracle leadership hopes to make money on providing the complete infrastructure stack as a service.

“We’ll also be providing the hardware, the application management and complete operations,” Catz said. These trends will not have substantial impact on the company’s bottom line immediately, but will show themselves more distinctively in the medium-to-long term, she warned.