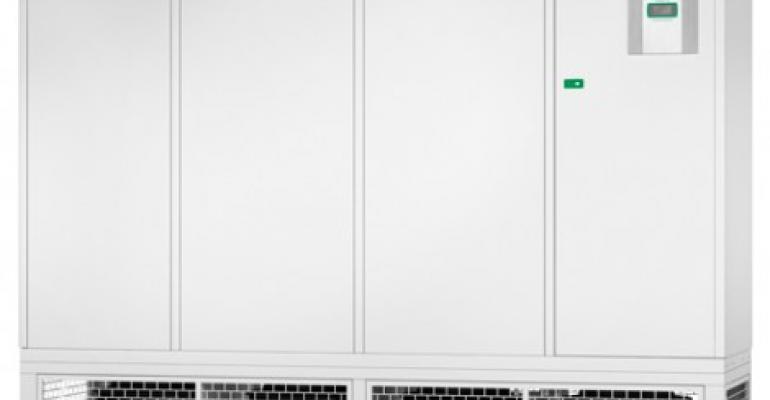 Schneider Ships Its Most Powerful Perimeter Cooling Units Ever

Manufactured in Costa Mesa, California, these are serious AC units for big data centers, such as colo and cloud provider facilities. At 180 kW, the units are second in capacity only to Schneider’s EcoBreeze line of indirect evaporative air handling units.

Aside from being the highest-capacity perimeter cooling units the company has ever made, HDCV 4500 and HDCV 5000 come with a number of standard and optional features some of which are firsts for the French vendor. List price of the 4500 model is about $50,000, and the 5000 costs about $53,000.

The biggest first in both of the latest data center cooling products is an underfloor fan module. “Instead of fans being up inside the cooling unit, they’re placed in a separate fan module below the raised floor,” Joe Capes, business development director for Schneider’s cooling line of business in the Americas, said.

The fans are blowing cold air directly into the plenum under the raised floor. The benefit is a lower overall air pressure drop as a result of the unit’s operation, which means the fans can spin slower and use less energy.

To make the system scalable, Schneider offers the fan modules separately from the cooling unit. This way, any number of modules can be installed under the floor when the data center is being built but they don’t all have to be activated until later in the facility’s life, when the operator adds more cooling units to expand capacity.

“You can actually place all the fan modules into their recesses on day one,” Capes said.

If you want more efficiency, you can add an optional high-efficiency filter plenum for about $5,000. “It’s essentially a filter box which mounts to the top of the HDCV unit, and it uses a low-pressure-drop filter arrangement to enable a pretty dramatic improvement in efficiency,” Capes said.

The 20-inch-high box reduces fan power consumption by about 500 W when added instead of the standard MERV 8 filter. Again, lower pressure drop means lower fan speed, which is paramount in data center cooling if you care about energy consumption.

The main feature that makes the new units and other products in Schneider’s Uniflair LE data center cooling line efficient, however, is the cooling coil design.

Instead of the traditional A- or V-shape coil, Schneider uses a slab coil, which is exactly what it sounds like. The slab shape has a large flat cooling surface area and also results in a lower pressure drop, Capes explained.

Schneider offers Blue Fin coating for its coils as a standard feature, while its competitors offer it as an add-on, Capes said. The chemical coating helps prevent corrosion and adverse effects of condensation.

In addition to efficiency features, the new units come with a few resiliency options.

One is a dual power supply with an automatic transfer switch. Schneider has been offering this as a custom feature for about one year, and has now turned it into an off-the-shelf option. The feature is a must in data centers built to Uptime Institute Tier III or Tier IV standards, Capes said.

Another resiliency option is an ultra-capacitor backup power option for the unit controller. It’s essentially a tiny uninterruptible power supply just for the cooling unit’s controller to speed up the process of bringing the unit back to operational state in case of a power outage.

“It kind of keeps the brains alive,” Capes said about the option, which costs about $350.

Such cooling units are not usually put on UPS backup, so when there is an outage, they shut down and stay down for however long it takes the operator to start the backup generators. The ultra-capacitor essentially provides onboard reserve power to keep the controller alive so it’s ready to bring up the cooling unit as soon as the generators kick in.

Correction: A previous version of this article erroneously stated that the new Uniflair units were manufactured in Italy. They are actually manufactured at a Schneider facility in Costa Mesa, California, and the article has been updated accordingly. The cooling units' capacity was also corrected from 200 kW to 180 kW. Data Center Knowledge regrets the errors.