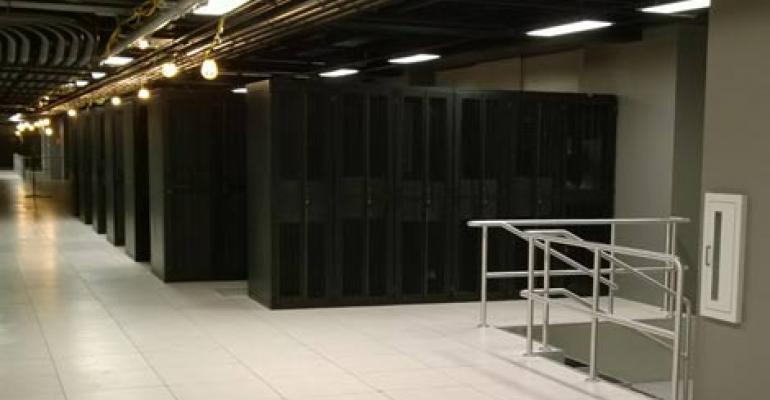 Some of the networking cabinets being readied for the new Telx data center in DataGryd&#8217;s space at 60 Hudson Street in New York. (Photo: Rich Miller)
Colocation

DataGryd Opens for Business in NYC, With Telx as First Tenant

NEW YORK - The newest player in Manhattan's data center scene is about to open its doors within 60 Hudson Street, the iconic Manhattan connectivity hub in TriBeCa. DataGryd is operating out of four floors in 60 Hudson, representing nearly a quarter million square feet of space in one of New York's most wired addresses.

One of those floors houses a brand new data center for Telx, which continues an aggressive expansion in the greater New York market. Telx is the primary interconnection provider within 60 Hudson, making it a natural tenant for DataGryd.

"Telx has always wanted to go first, because they were already in the building," said Peter Feldman, the CEO of DataGryd, which has been upgrading the power infrastructure within 60 Hudson to add capacity. Telx and DataGryd are hosting an open house and tour this week at 60 Hudson Street.

Launching a new brand is never easy, particularly in the data center business, which has historically had a high barrier to entry. It's particularly tough when your first location is one of the most competitive markets in the world. That's why landing an anchor tenant was a key milestone for DataGryd.

"Someone’s always waiting for the first person to put their toe in the water," said Feldman. "Some folks were waiting to see if we’d get all the power and cooling we need."

DataGryd launched in 2012, when it leased four floors of the 24-story building, and recently completed major infrastructure upgrades to the building to provide the power needed to fill those floors with data center tenants.

The first of those will be colocation provider Telx, which will begin operations early next month in 69,000 square feet of build-to-suit space prepared by DataGryd, which includes about 38,000 square feet of raised-floor space for customer equipment.

Telx got its start at 60 Hudson Street, and has facilities on three floors of the building. In recent years the company has added space in key hubs throughout the New York market, where it now operates 620,000 square feet of data center space.

Last year Telx opened NJR3, a 215,000 square foot greenfield data center at the company’s data center campus in Clifton, New Jersey, as well as new space at 32 Avenue of the Americas. Telx continues to operate colo space and the Meet-Me-Room at another major Manhattan data hub at 111 8th Avenue.

Telx isn't the only provider expanding in the New York market. In Manhattan, Sabey has entered the market with Intergate.Manhattan, renovating a former Verizon building at 375 Pearl Street.

It's even busier over in New Jersey, where Equinix, Digital Realty, DuPont Fabros, CoreSite and Internap have all brought new space online over the last three years.

"Everybody built at once," said Feldman. "You just had a glut, and that creates pricing pressure."

This building boom for service providers has resulted in a growing menu of data center options for companies seeking space in the greater New York market. The region has also been impacted by the aftermath of Superstorm Sandy, which flooded the basements of several data centers in lower Manhattan. While many traditional data hubs in the city were unaffected, the Sandy-related flooding prompted some providers to seek higher ground or contemplate sites in other regions.

Feldman has experience in both the data center and energy industries. He was a co-founder of Telx, and has also worked with cogeneration technologies. He says that although Manhattan can be more expensive than other markets, there are compelling business reasons for companies to have a data center footprint in the city.

"People would stay in Manhattan if they had the space," said Feldman, who said 60 Hudson remains a premier address for multi-tenant providers who need to interconnect with other networks. "It’s not the cheapest space in town, but it remains attractive as a long-term (connectivity) hub."

While there are several new projects in New York, Feldman believes demand for space in Manhattan will outpace supply.

"We are seeing some traction here," he said. "It’s a long sell cycle, but we’re on track. With normal market absorption, there’s plenty of business for us."