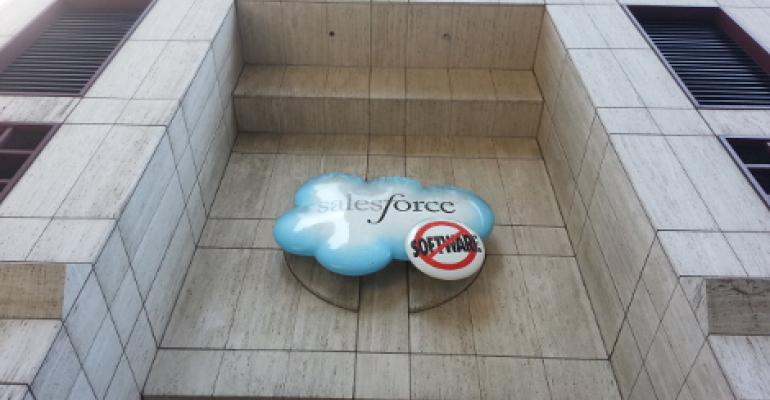 One of Salesforce&#8217;s office buildings in downtown San Francisco.
Business

Facility will be one of three new Salesforce data centers in Europe.

Software-as-a-Service giant Salesforce.com has chosen an Interxion data center in France to expand its European capacity. It is one of three data centers the company is opening in Europe to support its business in the region.

It's a big win for Interxion, one of Europe's largest colocation service providers which has several data center expansions slated across its footprint.

The largest SaaS provider, Salesforce.com is primarily known for its Customer Relationship Management offering, but also offers a Platform-as-a -Service called Force.com and an App Exchange. Salesforce.com has tapped colocation providers for all of its locations and continues to do so.

It has seen significant customer momentum across Europe, with record revenue growth of 41 percent last quarter, according to the company. In addition to the three data centers, it also recently announced plans to add more than 500 jobs across Europe in fiscal 2015.

In addition to the new data center in France, Salesforce.com recently unveiled a new French headquarters in an iconic building in the heart of Paris. The new headquarters will house the industry's first Digital Transformation Hub, a dedicated space to foster innovation and collaboration within the company's ecosystem of customers, partners, developers and employees.

"Salesforce.com's new data center demonstrates our ongoing commitment to France and supports the success of our growing base of customers and partners in the region," said Olivier Derrien, the company's senior vice president for France, Southern Europe and the Middle East. "Salesforce.com continues to increase its strategic investments in France, enabling local companies to harness the latest cloud, social and mobile technologies and power their digital transformation."

Salesforce.com participates in the EU-U.S. Safe Harbor framework, which permits EU-based customers to store some customer information on Salesforce.com’s U.S.-based servers. The new data centers will provide in-country locations as an option, making it an attractive to those with in-country data requirements.