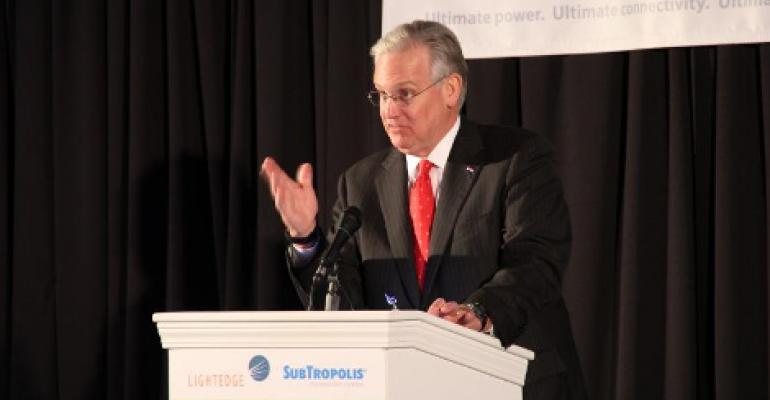 Legislators passed the 10 bills on the final day of the session, all of which offered tax breaks to businesses. Nixon called the bills “Friday favors,” a commentary on last-minute lobbyist appeasement, and vetoed all 10.

One of those bills is designed to encourage the development of data centers and accounts for two-thirds of those projected local losses of revenue. Both sides are unlikely to override Nixon on the bill, despite the Missouri General Assembly being heavily Republican.

The argument for vetoing is runaway tax credit programs in the state hampering the ability for it to provide in other areas. The argument for the bill is data centers are viewed as extremely positive for local communities, and several states are offering increasingly aggressive tax breaks to attract the business making for a competitive landscape.

Earlier this week, an economic development department in a small Ohio town, for example, recommended that the city give nearly $7 million worth of city-owned land to Amazon free of charge, in exchange for a commitment to build a 750,000-square-foot data center complex there.

The Missouri bill in question is Senate Bill 584. It lacks incentive conditions like minimum job creation and capital investment requirements. The bill would qualify all existing facilities regardless of whether they’re expanding. For the sake of comparison, the proposed land incentive in Ohio is tied to commitments to build within a defined timeline.

The bill is unlikely to make it past the senate and has slim chances to get by the house, even if it makes it that far. There’s a concern that it is so broadly written that businesses outside of data centers can take advantage, costing even more in revenue.

The veto comes as no surprise, Nixon citing his intention to veto the bill after it initially passed on May 16. The argument from Nixon is that it lacks in taxpayer protections, something included in earlier versions.

"On the last day of the session, without a fiscal note, without a hearing, they added an amendment that is going to cost hundreds of millions of dollars and that doesn't have any of the taxpayer protections that were in the data center legislation that was moved forward earlier on," Nixon told Kansas City Business Journal.

Nixon vetoed a record 33 bills in total, the most by any Missouri governor since 1961. A governor in the midst of the Ferguson police-shooting controversy, he has also vetoed several state budget line items.