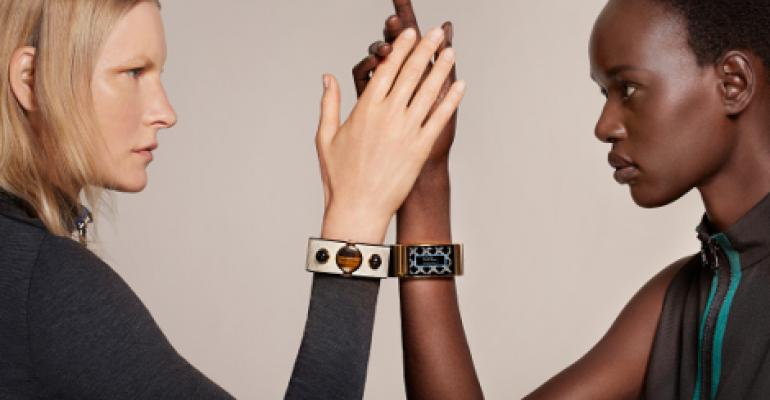 It is clear that Intel considers both categories high-growth areas of strategic importance. The company has managed to be inside the majority of the world’s servers and personal computers but has struggled in competing for share of the smartphone market and is now taking the wearables and IoT bulls by the horns.

The trends have big implications for data centers, a market where Intel reigns supreme. As Diane Bryant, senior vice president and general manager of Intel’s Data Center Group, put it in a short presentation during Krzanich’s keynote, “These devices are nothing without the data center.”

This sums up to about 1 trillion transactions per day, and “smartphone transactions will soon be surpassed by wearables,” Bryant said.

On the data center front, Bryant and her colleagues announced the latest generation of Intel Xeon processors for servers, storage and networking hardware at a press conference in San Francisco Monday.

Krzanich showed off two wearable devices Intel announced at January’s Consumer Electronics Show in Las Vegas: the SMS Audio BioSport headphones, which monitor the user’s heart rate and use power from the device they’re plugged into, and Edison, a tiny $50 dual-core 22-nanometer Atom System-on-Chip, which includes memory and network connectivity and can be connected to expansion boards and upgraded with USB capabilities.

Edison is the next-generation relative of a similar SoC called Galileo, and Krzanich expects to have an “explosion of innovation around this.” Like Galileo, it is open and aimed at hardware and software developers that want to make tiny smart devices.

Intel CEO spent a good part of his keynote talking about MICA, or “My Intelligent Communication Accessory.” Unveiled last week at the kick-off of New York’s 2015 spring/summer fashion week, MICA is essentially a smart watch in the form of a designer bracelet for women powered by an Intel chip.

“This is something you want to wear independent of the technology that’s inside,” Krzanich said about MICA. “This is a platform that I believe developers can now build upon both at the hardware level and the software level.”

Speaking of smart watches, Greg McKelvey, chief strategy and marketing officer with Fossil, a company that sells high-end watches and other accessories, joined Krzanich on stage to talk about a partnership the two companies have recently entered into. The partnership, naturally, revolves around wearables.

While Fossil has an 80-percent market share in $100-$500 watches, its brand is on one out of every five watches sold in the world overall, McKelvey said. This is because of all the cheaper watches that are sold, and Fossil considers intelligent accessories an opportunity to expand its market reach. “Wearables leverage what we already do well,” he said.

In the Internet of Things space, Intel’s strategy has two general fronts: enabling IoT developers and pushing for standards.

“Internet of Things for the industry is almost like wearables for machines,” Krzanich said. “We can grow this business within our own organization to something north of 20 percent per year, now through 2020.”

One of the goals is to enable developers to build intelligent edge devices that are able to connect to a central data center. One of Intel’s partners Daikin, for example, has created a board it is going to attach to all home air conditioning units to monitor them remotely to reduce the amount of unnecessarily field service calls its technicians respond to.

The idea is to build a standard framework so all devices can communicate using a standard set of protocols, regardless of who makes them.