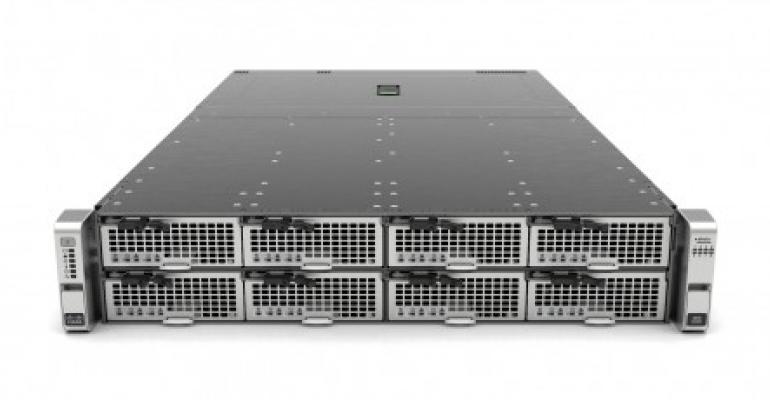 The company has added modular servers for scale-out data center architectures to the family, a mini-UCS for edge locations, ever more powerful rack and blade servers and a new version of its UCS Director software, which now has extensive Big Data capabilities.

The new rack and blade servers are fourth generation of the bread-and-butter two-socket UCS machines. The updated UCS Director software now features native support for both SAP Hana and Hadoop.

The Mini and the M-Series, however, are completely new product categories designed to bring new workloads within the realm of UCS.

“The M-Series is a ‘relook’ at the fundamental server architecture,” Todd Brannon, director of product marketing for Cisco UCS, said.

Designed with scale-out IT architecture in mind, it features bare-bones compute cartridges that share everything except CPU and memory. There are two compute nodes on each cartridge, and eight cartridges fit in a 2U chassis.

This is made possible by Cisco’s UCS Manager software, which abstracts all components in the system and manages them in a scalable and programmable way. The software manages every configuration setting and enables users to reconfigure the system on the fly.

Disaggregation of individual components is made possible by a virtual interface card, which turns the system into a PCI fabric.

Cisco not after web-scale market

While things like scale-out architecture and fabrics of disaggregated server components are generally from the world of web-scale data centers operated by the likes of Google and Facebook, Cisco’s M-Series line is not aimed at the web-scale market.

“They have already moved on to designing and procuring their own systems,” Brannon said about the web-scale clients.

Instead, Cisco is going after the 50 to 100 customers whose scale is below that of Googles and Facebooks of the world, he explained. It is a new market for Cisco servers – a world where a single application runs across many servers and scales by adding more servers.

The M-Series server architecture is very flexible. While the nodes currently come with Intel Xeon E3, they can support a variety of processor types. The architecture could theoretically support ARM chips if necessary, Brannon said.

The new UCS Mini is a converged all-in-one system built for non-data center environments. Users can install it in edge locations but use UCS Manager to manage it along with UCS deployed in their data centers, merging the two types of environments into one.

The Mini scales from one to 15 servers and can be deployed in branch offices, retail locations or on premises of service provider clients.

UCS is now a $3 billion business for Cisco and growing, Brannon said. This is while many of the company’s competitors in the x86 server market are “flat-lining.”

“We met a lot of unmet need in the market when we introduced UCS five years ago,” Brannon said. That unmet need was for a converged infrastructure solution that consisted of pre-integrated components of the typical IT stack.