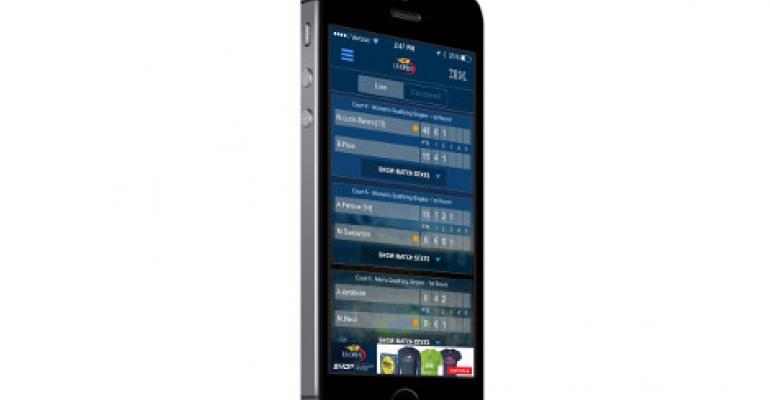 As athletes compete in the thick of the U.S. Open, IBM has decided to remind everyone just how much of its technology is involved in running the massive tennis tournament.

The company has long been a partner of the competition — the collaboration is entering its 25th year -- and the technology behind all the stats has evolved greatly over the years. IBM is now providing deeper analytics and an experience optimized across all three screens today's users see the spectacle through.

The event is a high-profile use of technologies the company hopes to further proliferate in other industries. Clients in banking, government, healthcare, retail and other business verticals are already using the same mobile, analytics, cloud and social technologies that enable the United States Tennis Association to connect with millions of tennis fans around the world.

Making sense of lots of data

IBM had 54 million visits during the last tournament, up 18 percent from the year before. Last year, there were about 5.5 million mobile application launches.

“It all starts with the collection of data,” said John Kent, IBM worldwide sponsorship marketing executive. “The shelf life of data is also very small. The volume of data is so huge and IBM technology helps identify patterns. A lot of this takes place in the cloud. We now have very few servers onsite, except for the scoring system, staging and publishing environment.”

Overall, all the content that’s published -- be it videos, photos or news articles -- ends up being more than 20 terabytes of data. IBM is continuously sifting through data points during the entire tournament, providing key factoids based on player trends to commentators, as well as general trends through identifying patterns.

The umpire records the outcome of the point and other factoids, while court-side statisticians record stats such as radar and player and ball position data. All the information comes to IBM onsite. The broadcaster puts up a graphic relating to the point, such as the number of Aces.

IBM redesigned the application to generate point commentary this year. After the point, relevant factoids are presented.

“The systems we provide are not just data, but we’re also trying to drive some insights,” said Kent. ESPN uses SPSS predictive analytics technology to look at 41 million data points, find patterns and generate 'keys to the game.' It looks at factors such as whether or not two competitors played in the past or against players of similar style.  “ESPN makes use, picking one of the keys calling it an IBM insight,” said Kent.

“During last year’s traffic, we looked at real-time traffic, but [also] other factors. such as player popularity on Twitter,” he said. “If a player is coming up on Twitter, the site reflects the trend. The algorithms the team has written will predict traffic, and Orchestrator will change based on that forecast. What’s critical is not so much what will happen at 5 [o'clock], but what will happen in the next hour. ”

The infrastructure is in a software-defined environment through IBM SmartCloud Orchestrator. The company hopes to implement software-defined networking and storage going forward. Orchestrator is based on open standards and can manage public, private and hybrid clouds through an easy-to-use interface.

“We also make some use of the Watson foundation for insights and streams," Kent said. "We don’t take full advantage of Watson yet, but we’re looking at ways of doing that. The core of this really makes use of a lot of the IBM technologies that make up cloud.”

“It’s a journey rather than a stick in the ground with cloud,” said Kent. “We’re standardizing of all our systems. First we’re consolidating, virtualizing, then we get standard processes in place.”

IBM also uses a technology called MessageSight for real-time data. MessageSight is a full-featured messaging appliance designed for machine-to-machine and mobile environments. The scoreboard subscribes to the message site and as the score changes, it’s pushed out in real time to end users.

One of the major evolutions is how the data is displayed over desktop, tablet and phone. Part of the challenge is optimizing for a wide array of devices. “A few short years ago we had a website and mobile site,” said Kent. “Now you need to optimize, and the complexity really comes in with working with USTA and what kind of experience they want on the platform. iPhone and Android needs snackable info, whereas an iPad is more of a second-screen experience.”

Behind the U.S. Open, IBM uses what it refers to as a "three-site architecture."

This architecture has been in place since IBM used to do the Olympics. The three-site architecture is “more disaster avoidance than disaster recovery. Rather than doubling capacity, we put 50 percent in each location,” he said. “We can lose an entire site and still have 100 percent. We can perform maintenance while it remains up.”