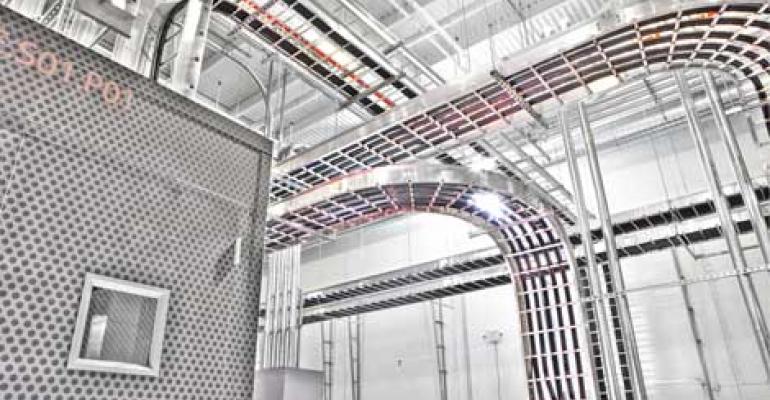 IO's current data center project in Slough, England, will be its last company-built data center. The company will focus on partnerships with service providers for future expansion into new markets.

About 25 miles outside the center of London, IO has begun construction on its newest data center. The IT infrastructure provider is building in Slough, the growing data center hub in the western suburbs of London, where it plans to begin operations in early 2015.

The Slough facility, which will serve as IO's base of operations in Europe, also serves as a major transition point for the company.

"We will not build out any more data centers after London is finished," said Jason Ferrara, vice president of marketing at IO. "Our go-to-market will be through service providers. It’s an easier way to get into new markets. Service providers and IO are a match made in heaven."

The shift builds upon the "Powered by IO" strategy, which was launched in 2012 to build out a global network of partner sites using IO’s modules and data center management software. FORTRUST and CenturyLink are each deploying IO modules at scale to house customers IT gear. IO has also lined up key partners in its overseas markets, working with StarHub and TMI in Singapore, and Finnings in the UK.

A footprint across three continents

IO now has a global footprint of company-built data centers, including four facilities in the U.S. - two in the Phoenix market, and sites in New Jersey and Ohio - along with the presence in Singapore and the UK. IO will continue to sell space in these facilities, and work directly with large customers seeking on-site deployments, but will partner with service providers in new markets.

The FORTRUST and CenturyLink partnerships have demonstrated the strength of the IO partner model, and are driving demand for the company's modular data centers, known as IO.Anywhere. "That’s where we see the uptick," said Ferrara.

Service providers are an important customer segment for modular data centers. The standardized, factory-built units offer excellent speed to market, cost-effective use of capital, and allow providers to expand incrementally, with predictable costs for each new unit of capacity.

“The just-in-time delivery of the IO.Anywhere data modules enables Fortrust to add capacity in 200kW and 400kW increments within 60 days of customer demand,” said Rob McClary, Vice President of FORTRUST, in describing the success of its partnership.

Modular capacity is a particularly attractive tool for service providers seeking to expand into secondary markets. A substantial portion of the third-party data center footprint is centered in six large markets - Silicon Valley, northern Virginia, greater New York, Chicago, Los Angeles and Dallas. These cities have become crowded with competing providers, while demand for Internet services is growing in cities that previously might not have supported the multi-tenant data center model. As a result, more providers are looking to new geographies to expand beyond the "Big Six."

Incremental growth is attractive in these second-tier markets, where new entrants prefer to start small and build gradually, rather than incurring the up-front expense of a large data center build. This has boosted wholesale players like Compass Datacenters, which has found a niche in deploying factory-built infrastructure to service providers in secondary markets.

Focusing on service providers also offers favorable economics for IO, which can supply the modules and technology (including its popular IO.OS management software) while allowing partners to handle sales and marketing through small teams familiar with these local markets. Building deep relationships with growing providers holds the promise of regular repeat orders. IO says its partnership plans will also include professionals working with the data center industry, such as engineering firms.