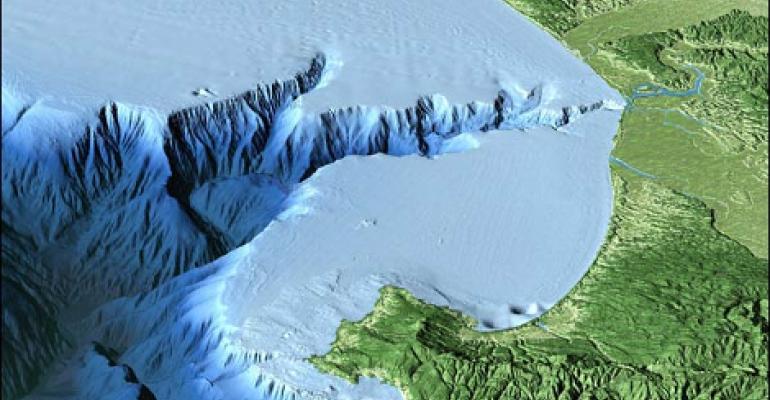 Monterey Submarine Canyon, where the proposed desalination plant will draw water from, is one of the deepest submarine canyons along the U.S. Pacific coast and comparable in scale to the Grand Canyon. (Image: DeepWater Desal)
Design>Power and Cooling

Desalination Plant and Data Center: Not as Odd a Couple as May Seem

Data center piece completes the puzzle for solving a water crisis in a California county.

Crises tend to inspire ideas for creative, unexpected solutions. One such crisis has brewing in California’s Monterey County, which is experiencing water shortages because of the severe drought plaguing the state, and where a group of entrepreneurs and local officials have come up with an idea to build a massive water desalination plant to address the crisis.

There is obviously nothing new about a desalination plant. What is unique about the project is that it will take some serious data center capacity to make it work financially.

There are lots of problems with desalination plants. They are expensive; they consume a lot of electricity; they kill marine life in areas they draw water from.

But the group behind the project, being put together by a company called DeepWater Desal in Moss Landing, California, have found ways to address each of those problems.

Several water agencies in the area have proposed smaller desalination plants of their own, and DeepWater Desal is proposing that they instead join the project for a much bigger plant, which will cost less because of its scale. For that to happen, the agencies would have to form a Joint Power Authority – an entity that would enable them to jointly own the plant and one that would be able to issue a public bond measure to fund the construction.

Dave Stoldt, general manager of the Monterey Peninsula Water Management District, said the bonds would be secured by water purchase agreements with municipalities that are in dire need of new sources of water.

To address the plant’s potential impact on marine life, it would draw water from the nearby Monterey Submarine Canyon. One of the largest such canyons on the U.S. Pacific coast, it is so deep that hardly any life exists beyond a certain point.

Grant Gordon, chief operating officer of DeepWater Desal, said the plant’s intake would be at a depth virtually no light reaches. Because there is so little light, there is very little food and therefore not a whole lot of life down there.

Too cold for desalination, perfect for data centers

That leads to another problem. Water from such depth is extremely cold and would take a lot of energy just to bring it to the appropriate temperature for reverse osmosis – a process used to desalinate seawater.

There is at least one example of a massive data center that uses seawater cooling. Google has retrofitted a building in Hamina, Finland, that formerly housed a paper mill and used seawater for cooling, into a data center.

An adjacent data center in Monterey would also be used to lower energy cost for the desalination plant. Addition of the data center element to the project spurred the idea of creating a municipal utility that would be able to buy energy for the entire complex on the wholesale market, which would be about half the retail rates in the area.

There is obviously a lot of moving parts to the concept, and a lot has to happen for DeepWater Desal’s idea to come to fruition. But, the company has support from many local officials because of the very real need for a quick resolution to the water crisis.

The company was founded three years ago to find a solution, and the combination of a desalination plant and a data center campus is the result. The plans are currently being evaluated for the project’s impact on the environment, and an Environmental Impact Report will be completed in about one year, Stoldt said.

DeepWater Desal’s officials have met with multiple data center developers to pitch the location, and the response, according to both Gordon and Stoldt, has been positive. James Hamilton, vice president and distinguished engineer at Amazon Web Services, was so impressed after a conversation with Gordon that he took to his personal blog to write about the company’s plans in Monterey earlier this month.

There is potential for up to 150 megawatts of power to be available for data centers at the Moss Landing site, Gordon said, and the plant would provide the data centers there with an unlimited supply of incredibly cold water almost at no cost. “It’s like a perfect synergy,” he said.