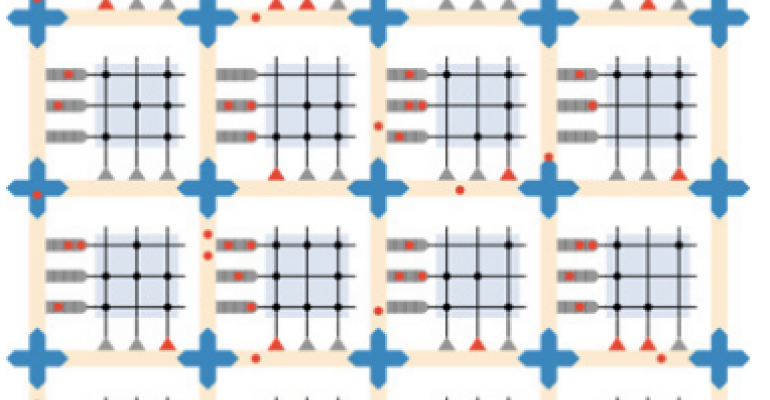 A visualization of the brain-inspired architecture that forms the basis of the new chip. (Image: IBM)
Companies>IBM

Inching toward cognitive computing, company designs chip that does away with von Neumann architecture.

Claiming a big step toward cognitive computing, IBM unveiled a chip called SyNAPSE that uses a brain-inspired non-von Neumann computer architecture. The von Neumann architecture has been in use almost universally since 1946. The neurosynaptic computer is the size of a postage stamp and runs on the amount of energy equivalent to a hearing aid battery.

The 5.4 billion transistors chip is built on Samsung’s 28nm process technology. The new chip bridges the divide between the human brain’s cognitive capability and ultra-low power consumption. It is one of the largest CMOS chips ever built but consumes a meager 70 milliwatts during real-time operation, which is far less than a modern processor.

The second-generation chip is the culmination of almost a decade of research and development. It brings us a potential future of neurosynaptic supercomputers. A single-core hardware prototype was unveiled in 2011. In 2013, a new software ecosystem with new programming language and chip simulator was released.

To enable system scaling beyond single-chip boundaries, adjacent chips, when tiled, can seamlessly connect to each other, building a foundation for future neurosynaptic supercomputers. To demonstrate scalability, IBM also revealed a 16-chip system with sixteen million programmable neurons and four billion programmable synapses.

"These brain-inspired chips could transform mobility, via sensory and intelligent applications that can fit in the palm of your hand but without the need for Wi-Fi.”