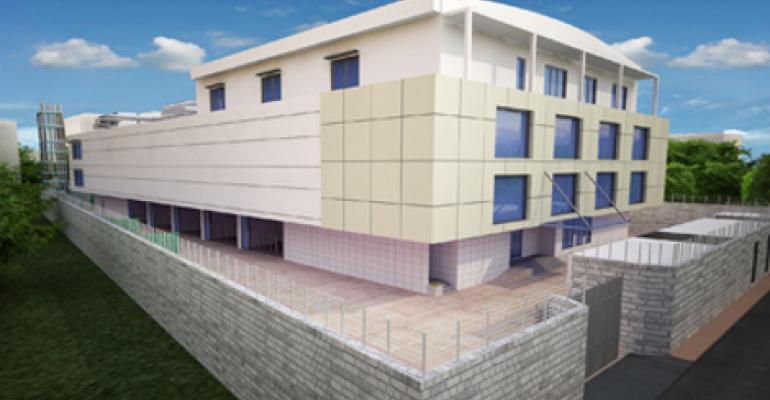 Netmagic announced the launch of its 110,000-square-foot data center in Bangalore (pictured) in March. Expansion efforts are now focused on Mumbai, where 40 to 50 percent of India’s IT market is. (Image: Netmagic)
Business

Netmagic, subsidiary of the Japanese telecom giant NTT Communications, is building a massive data center in Mumbai, which it says will be the largest data center in the area.

NTT bought a 74-percent stake in Netmagic in 2012, when the Indian company was in expansion mode, its management looking at a potential IPO, domestically or on Nasdaq, or an acquisition by a larger player. Sharad Sanghi, founder, managing director and CEO of Netmagic, owns the rest of the company.

The future Mumbai data center, dubbed "Mumbai DC5," will have 300,000 square feet of data center capacity. “This will be the largest data center in Mumbai,” Netmagic president and executive director Sunil Gupta said.

Currently, the largest data center in the market is a 200,000-square-foot facility by Reliance Communications, he said.

Building in the big city

Netmagic's fifth Mumbai data center will be especially attractive because it is being built in Mumbai proper, as opposed to the suburb of Navi Mumbai, where most of the region’s data centers are concentrated. Customers want to be in the city, but real estate and power there are expensive (like in any of the world’s big cities), so data center providers prefer to build beyond city limits.

Besides being a convenient location, Mumbai is home to an international fiber landing station and has a reliable power infrastructure. Other Indian data center markets are notorious for having unreliable utility grids, forcing operators to rely on generators for prolonged periods of time.

The new facility will have access to 20 megawatts of power and enough room to support 2,700 racks. If Netmagic needs to upgrade power capacity, it has the option to add up to 8 megawatts.

This is the second time the company is building its own data center from scratch. The first one was its Bangalore DC2 facility. Its other facilities are leased and retrofitted.

NTT will fund the entire project, slated for completion in July 2015. The project is currently in design phase but the ground at the construction site has already been broken, Gupta said.

Netmagic currently operates eight data centers in India, located in all four of the country’s major IT hubs: four in Mumbai, two in Bangalore, one in Deli and one in Chennai. It has such massive presence in Mumbai because that is where 40 to 50 percent of the country’s IT market is, and that is where the company is headquartered.

“Whatever you build in Mumbai gets consumed,” Gupta said. Netmagic opened its fourth Mumbai data center in mid-2011, and by the end of last year the facility was almost full.

Mumbai DC4 filled up so quickly because two large customers came in last year and took almost all remaining capacity. One of those customers is Flipkart, the Indian equivalent of Amazon that raised a $1 billion funding round last week.

Amazon followed Flipkart’s funding announcement with an announcement of its own, saying it would invest $2 billion in growing its business in India. It has been one year since Amazon has had a business in India, and CEO Jeff Bezos said in a statement that market response there had surpassed the company’s expectations.

“We see huge potential in the Indian economy and for the growth of e-commerce in India,” Bezos said. “At current scale and growth rates, India is on track to be our fastest country ever to a billion dollars in gross sales. A big ‘thank you’ to our customers in India – we’ve never seen anything like this.”

Gupta declined to say whether Amazon was shopping for data center space in India, but did say that a large unnamed e-commerce company was currently shopping for a massive chunk of capacity in the market (up to 1,000 racks).

Both the online marketplace and Amazon Web Services, the company’s public cloud infrastructure services arm, currently serve Indian customers out of data centers in Singapore. Services in what Bezos called the company’s fastest-growing market ever would benefit from the decrease in latency infrastructure placed directly in the country would bring.

Flipkart, the company Amazon is spending $2 billion on competing with, is using 250 racks in Netmagic’s DC4 facility in Mumbai. It is one of the top e-commerce companies in India, many of which are the data center provider’s customers, Gupta said.

Full suite of data center services, and nothing else

Netmagic keeps a narrow focus on data center services. “We don’t do any other business but data centers,” Gupta said.

This means the company will provide services like colocation, bandwidth and remote hands, but will not do things like network or system integration. About 70 percent of its revenue comes from managed services.

In the data center, its services span the gamut, from power and cooling to managed operating systems and security services. Its staff will manage any enterprise or e-commerce application.

These deep managed services capabilities are what enables Netmagic to compete on the Indian market with numerous deep-pocketed telcos, Gupta said. There is a lot of demand from customers that want to outsource everything and focus on their core applications.

The company also provides a variety of cloud infrastructure services. Its main competitors in this space are Amazon and IBM SoftLayer, Gupta said.