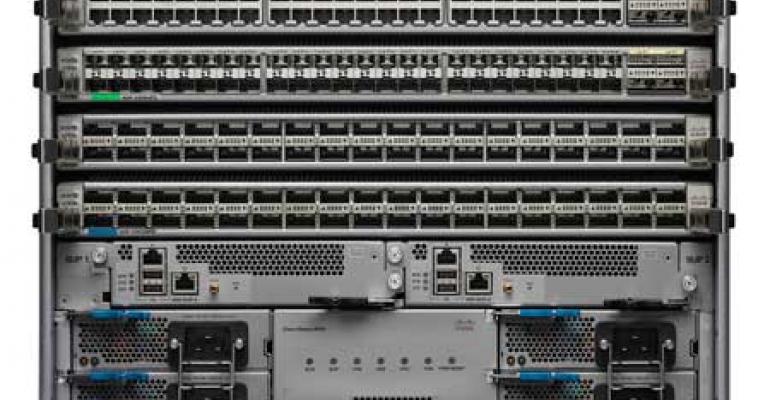 Cisco has finally launched its flagship data center network solution, Application Centric Infrastructure (ACI), which binds physical and virtual elements and also allows its Application Policy Infrastructure Controller (APIC) to be ordered with ACI enabled. Cisco began the shift to ACI last summer during its Cisco Live! conference and has continued to proclaim that it will lead the battle for SDN and future networking platforms.

Cisco's senior vice president of marketing for the Insieme business unit Soni Jiandani said its ACI vision was focused on leapfrogging SDN with a holistic approach that focused on the delivery of the application, "allowing our customers to pick and choose the best-of-breed virtual or physical appliances to meet their needs." Jiandani described the future of networks as a set of mixed workloads that will be matched appropriately to virtual machines, bare-metal and Linux containers, such as Docker's. The simplicity of ACI provides a common policy framework that empowers teams across the IT environment with the ability to more rapidly and cost-effectively deploy applications.

Cisco is offering four ACI starter bundles, intended to act as proof-of-concept deployments or small production environments to start. Users can then scale and extend to existing networks as they wish. The bundles start at $250,000 and allow organizations to extend ACI policies to existing Nexus fabrics and redirect traffic to the ACI fabric for policy enforcement as needed.

Two of the bundles can be used to scale out a Cisco Unified Computing System-based converged infrastructure solution, such NetApp FlexPod or VCE VBlock. Cisco ACI pricing is based on a per-leaf perpetual ACI software license, instead of a monthly per-virtual-machine cost. Catalyst 6000 and 6500 customers have starter-kit options as well, which support an upgrade to a Nexus 9508 and either the new X9464TX or X9564TX line card.

Cisco customers may also start with ACI via Nexus 9516 merchant-silicon chassis and new line cards. With this a customer could migrate to an ACI environment with ACI-capable line cards and APIC whenever they are ready.  New eight- and 12-port 100 Gigabit Ethernet line cards will be available later this year for the Nexus 9500, giving 128 ports of 100 GbE in a single chassis. The Nexus 9000 series can operate in standard NX-OS mode or in ACI mode.

Cisco, NetApp deploy ACI in own IT environments

Taking the 'eat your own dogfood' approach to extolling the benefits and use case for ACI, Cisco's IT teams set it up in their own IT environment. Cisco's senior vice president of IT for Global Infrastructure Services John Manville said, "We have deployed ACI in production, and we are continuously giving feedback to our engineering teams.”

Cisco said more than 175 customers signed up for the APIC trial during the hardware beta period. One of those customers, NetApp, setup a DevOps private cloud.

NetApp's CTO Jay Kidd said the cloud spanned 2,300 racks and was wired end-to-end with 40 GbE capacity with Nexus 9000.  "One of the beauties of the (Nexus) 9K is the ability to gracefully transition and combine 10Gig and 40Gig together in the same infrastructure," he said. "Then, with ACI being able to build up these profiles for the applications or the test scenarios for those applications, store them, provision them dynamically."

In the competition for enterprise networking funds, VMware, one of Cisco's closest partners, offers an alternative vision for the future of networking. While Cisco blends physical and virtual network components with ACI, VMware's NSX software overlay abstracts network control and is independent of the underlying physical network.