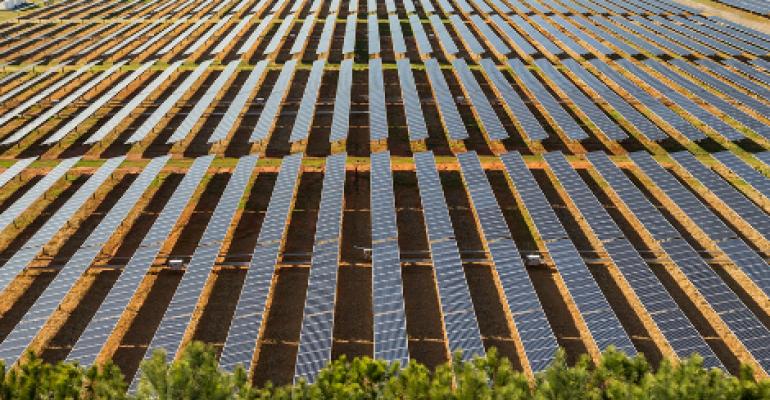 Earlier this month, few days after news came out that Apple was going to build its third massive solar farm in North Carolina, the company released its latest environmental responsibility report, which covers its fiscal year 2013 (October 2012 through September 2013).

The report includes a lot of information on energy use by the company’s data centers and their sources of energy. Particularly, while its data center capacity and power consumption grew tremendously year over year, Apple invested in enough renewable energy to continue claiming that its data centers are powered by renewables entirely.

Data center energy consumption is something the public has become somewhat more aware of since 2011, when Greenpeace started its campaign to pressure well-known high-tech brands to do something about the preponderance of coal energy in the power supply of their massive and growing data centers. Greenpeace included Apple, along with companies like Amazon, Facebook, Google, Microsoft and Twitter, among others, in its data center energy scorecards, which it has been releasing annually since.

Apple went from receiving very poor grades for energy transparency, carbon mitigation and site selection on the first 2011 report to becoming one of the three leaders who, according to Greenpeace, are “helping to build the green Internet” on this year’s scorecard. The other two leaders are Facebook and Google.

The company substantially ramped up its Prineville, Oregon, data center in 2013, brought online some initial capacity at its newest data center in Reno, Nevada, and increased energy use at the Newark, California, data center. The biggest increase in energy use that year, however, was at the company’s Maiden, North Carolina, site, which consumed about 60,000 megawatt-hours of electricity more than it did in fiscal 2012.

Maiden, Prineville, Newark and Reno are the four data centers Apple has built, owns and operates. The company also leases space from data center providers in numerous locations but does not disclose names of the providers, the locations or the amount of power it consumes there.

Its environmental responsibility reports focus on its own facilities, since those are the only facilities whose power sources it has total control of.

To provide reassurance that statements in its sustainability reports are correct, Apple has been using Bureau Veritas North America as an independent reviewer of the information. The bureau is a global testing, inspection and certification services company headquartered in France.

Apple included a statement from BNVA in its report, which confirms that the company’s reported energy consumption, renewable energy credits and greenhouse gas emissions for fiscal 2013 were correct.

Apple gets to claim that its largest data center, the one in Maiden, is fully powered by renewable energy because it has built a massive biogas-powered fuel-cell plant and two solar farms there. The project to build the third one, as mentioned above, is already underway. The site generates nearly 170,000 megawatt-hours of renewable energy a year for the local grid, exceeding the 162,000 megawatt-hours the data center consumed in fiscal 2013.

Each of the photovoltaic arrays in Maiden generates about one-quarter of the total, while the fuel cells (supplied by Bloom Energy) generate about half. The company did buy some renewable energy (five percent of the total) from the grid in 2013 to make sure it was fully covered while some of the generation capacity was under construction.

Buy it till you make it

In Prineville, Apple simply bought enough renewable energy to power the facility practically in its entirety in 2013. This will not be the case in the future, since the company is building a “micro-hydro” generation system there, which will use local irrigation canals to generate energy for the data center. The system is slated to come online sometime this calendar year.

Apple’s newest data center in Reno started operating in December 2012. In fiscal 2013 it consumed 3,000 megawatt-hours of electricity. The company bought locally generated geothermal energy to power the facility. It is building a 20-megawatt solar farm together with the local utility – a project it expects to finish by early 2015. Apple said it will continue buying geothermal energy until the array comes online.

The company also buys wind energy from the grid to power its Newark facility. It is able to buy wholesale renewable electricity in California through the state’s Direct Access program.

Cleaning up the colos

Being 100-percent renewable gets trickier with using colocation data centers, which Apple does not own and operate and most likely shares with other tenants. The company said the vast majority of online services are served from its own data centers, yet it continues to work with its colocation providers to clean up its energy load in their facilities.

Apple said about 70 percent of the power it consumes in colocation facilities has been renewable since early 2013. “And we won’t stop until we get to 100 percent,” the report read.