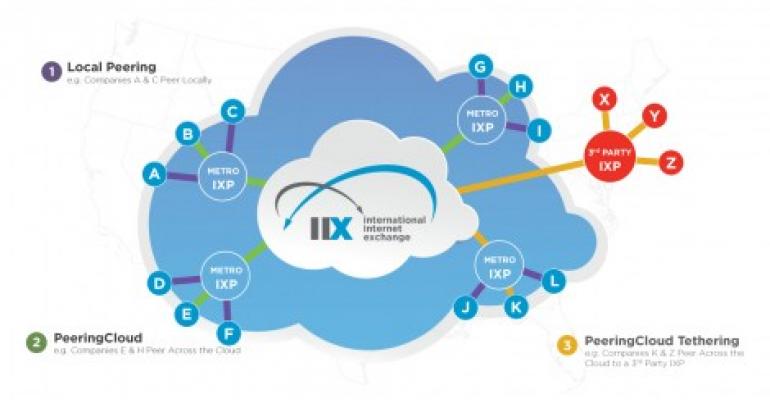 Management and advisory teams packed with peering veterans, startup wants to connect customers to all IXPs globally from a single location.

IIX (International Internet Exchange) has raised a $10.4 million Series A from New Enterprise Associates (NEA) and is ready to make a major market push. The company says its ushering in the next generation of interconnection and peering with a new platform. It has been stealthily adding locations and forming connections with leading content providers and now has the funds to grow its team, expand its product roadmap and increase business development activities.

The idea behind IIX is to make peering simple through distributed and interconnected Internet Exchange Points (IXPs). The IIX PeeringCloud enables its customers to connect to leading IXPs via a single interconnection from anywhere in the world. There's a simple user interface that lets users make these connections with clicks.

It’s not an overlay product, but a complete bypass of the public Internet, providing a one-click solution for national and global interconnection. By bypassing the public Internet, it improves latency, increases immunity to DDoS attacks and mitigates several other issues. It gives people the ability to directly connect to content providers like Box, as one example.

IIX is making a case for distributed and interconnected IXP’s and moving away from the interconnection “islands” that currently exist, where certain data centers providers control the major interconnection points. The platform is designed for enterprises, content providers, cloud providers and other network operators to enhance the performance of applications and services regardless of location.

“We’re taking advantage of a first-to-market opportunity,” said CEO and founder Al Burgio. “An analogy I use is the LinkedIn for enterprise networks. It’s a software platform for content and cloud application providers that enable them to securely interconnect regardless of location. People need to do this at scale, and that’s become cost prohibitive.”

These are lofty goals, but Burgio has quietly built a major contender. His team includes some Equinix veterans, including Bill Norton, co-founder of Equinix and published author on peering, Morgan Snyder, who spent a decade with Equinix, and advisory board member Jay Adelson, Equinix founder and co-creator of PAIX, formerly known as the Palo Alto Internet Exchange.

Today, Equinix controls most of the largest internet exchanges in the U.S.

Also on the board is founder and former chairman of the London Internet Exchange (LINX) Keith Mitchell. The management team is a veritable who’s-who of the peering world, “We’ve done it before and we’re going to do it again,” said Burgio.

"Virtualizing the core of the Internet"

IIX launched its first IXP in 2011. “We’ve tackled a lot in stealth and really validated an IX next-gen solution,” said Burgio. The company has since established presence in various markets in the U.S., Canada and Europe and is continuing to expand globally.

These Internet exchange points in various markets are connected not just locally but globally – an industry first, according to Burgio. “We’re virtualizing the core of the internet,” he said. “It gives the ability to directly connect regardless of scale, at the speed of business.”

IIX also has a growing ecosystem of customers, including big names such as Box, Blue Jeans Network, GoDaddy, LinkedIn and TripAdvisor.

The present-day Internet does not provide the degree of performance and predictability required by today’s mission critical applications. The movement to cloud is undeniable and the dependency on today’s form of interconnectivity isn’t suitable, Burgio said.

There is also added pressure placed on existing internet infrastructure. Distributed Denial of Service (DDoS) attacks are growing exponentially and less than two percent are correctly connected, he said. “These organizations have little to no control over the path of their data. Now you’re leaving yourself exposed.”

The platform isn’t trying to replace interconnection as we know it. “Our goal has never been to replace how local interconnection is done. It’s to introduce a new way that’s simple that can help you not just locally, but at scale,” said Burgio “Some people are peering locally; the rest of the world is still heavily dependent on internet transit. We inject ourselves into that blend.”