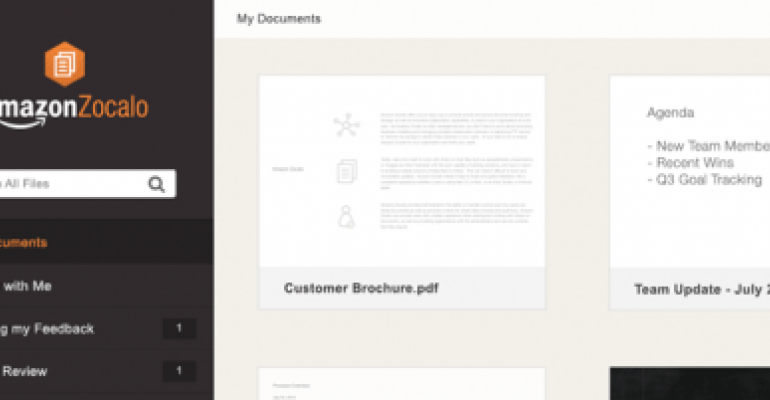 A look at the central hub in the new Zocalo online storage and collaboration service (source: AWS website)
Cloud

At Amazon's scale, Zocalo is poised to become a major challenger to the likes of Box, Carbonite or Dropbox.

Amazon Web Services (AWS) is deepening its service portfolio for mobile cloud developers and expanding into the online storage and collaboration market with a new service called Zocalo, which promises to be a fierce competitor to the likes of Box, Dropbox, Sugarsync or Carbonite.

Zocalo is a consumer-friendly storage and collaboration service with a nice front end, but the backend is secure and tailored for enterprise needs.

While S3 provides the foundational online storage piece of Amazon Web Services (the company's massive public cloud infrastructure business), Zocalo is more of a commercial service with all the trimmings and interface built-in. It is an attempt to provide a service free of complexity, which the company claims has been plaguing enterprise solutions in this space.

Many use email as a way to share documents and files, but the approach is unorganized and doesn’t provide the necessary security needed in an enterprise setting. Zocalo lets users share and gather feedback through a secure central tool on the device of their choice, including laptops, iPad, Kindle Fire or Android tablets. It integrates with existing corporate directories, such as Active Directory, and provides administrators with flexible sharing rules, audit logs and control of where location is stored.

All data is encrypted in transit and at rest. It’s also available with Amazon Workspaces, the recently launched Desktop-as-a-Service option.

Zocalo is priced at $5 per user per month, including 200 gigs of storage. WorkSpaces customers are given up to 50 gigabytes for free, and pay $2 a month instead of $5 for the 200 gig package.

Business appropriate for a giant

As we noted in our coverage of the latest $150 million funding round for Box, online storage and collaboration is an expensive business to be in and is often unprofitable unless you have serious scale. The size of Amazon, coupled  with the tie-in with WorkSpaces, translate into a strong offering that is very likely to last.

Many users of early startups in the space had to worry about their providers potentially folding -- and rightfully so, as several companies in the space had closed their doors, forcing mass data migrations. One particularly illustrative example was the demise of Nirvanix.

“Customers have told us that they’re fed up with the cost, complexity and performance of their existing old-guard enterprise document and collaboration management tools,” said Noah Eisner, general manager for Amazon Zocalo. “AWS was increasingly being asked to provide an enterprise storage and sharing tool that was easy to use, allowed users to quickly collaborate with others and met the strict security needs of their organizations. That’s what Amazon Zocalo was built to do.”

The recent mobile development additions address the still rising tide of mobile applications.  More users are accessing the Internet through phones and tablets and developing specifically for mobile experiences continues to grow.

Mobile Analytics  provides developers with analytics detailing usage reports within an hour of data being sent to the app.

Cognito is user identity and data synchronization service which lets developers create apps that can authenticate users through public log-in providers (sign in with Facebook accounts, for example). It also keeps app data, including user preferences and game state, synced between devices.

The SDK is for helping developers across several platforms access these new services in addition to the ones they already use.