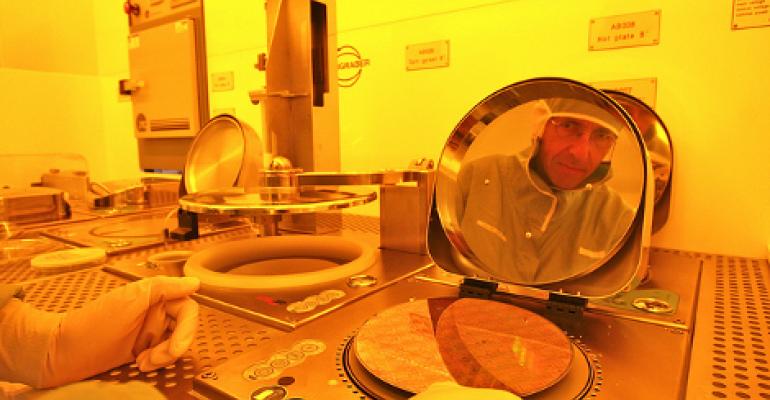 The reflection of Roland Germann, manager, Nanotechnology Center Operations at IBM Research &#8211; Zurich in the clean room with a silicon wafer. (Photo by Michael Lowry, courtesy of IBM)
Companies>IBM

As if to tell the world that it has no intention of getting out of the chip business, IBM announced a $3 billion investment program in research and development for processor technologies of the future.

Reportedly close to selling off its money-losing Power chip manufacturing business, the Armonk, New York-based technology behemoth now says it is doubling up on its efforts to get beyond the 7-nanometer process technology threshold – the point at which fundamental physics may force Moore’s Law to break down.

While $3 billion is an impressive figure, Big Blue – which said it would spend that money on chip R&D over the next five years – will need a lot more than that to compete in the kingdom of Intel. Commenting on IBM’s announcement, an Intel spokesperson told us Intel spends about $10 billion a year on processor R&D.

IBM’s latest Power8 chips are built using 22 nm process technology, while Intel’s 14 nm Broadwell chips are already in production. “We’re on track to get to 7 nm,” the Intel spokesperson said. The chipmaker has not revealed a timeline for availability of 7 nm processors.

Claiming that it has twice as many patents (500 plus) for technologies that will drive beyond-7-nm progress than the “nearest competitor,” however, IBM’s tone is optimistic, regardless of its chip business losses, which an anonymous source told Bloomberg were about $1.5 billion a year.

The giant’s $3 billion investment will focus on two broad research programs. The one looking at process technology beyond 7 nm is meant to address physical challenges the company says will make it extremely difficult and expensive to manufacture them.

“The question is not if we will introduce 7 nm technology into manufacturing, but rather how, when and at what cost?” John Kelly, senior vice president of IBM Research, said in a statement. 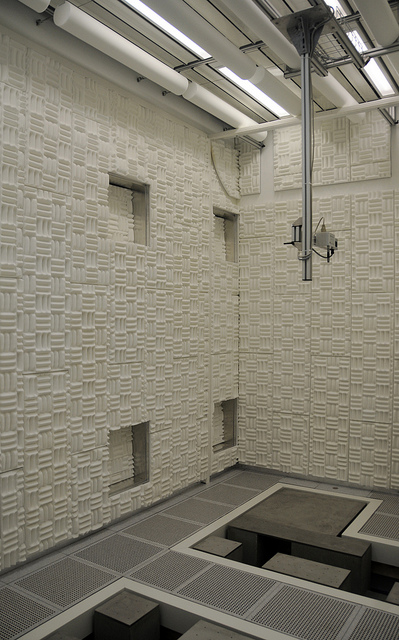 IBM’s "noise-free" lab in the Binnig and Rohrer Nanotechnology Center of IBM and ETH Zürich (a university). The tools will be placed on custom-tailored tool bases. As part of the initiative, IBM is investing in research facilities in Switzerland, New York State and California. (Photo by Emanuel Lörtscher, courtesy of IBM)

The second program is related to the first one. Its goal is to find materials that are better than silicon at handling 7 nm and below. Silicon transistors, IBM said, are close to reaching a size so small they will no longer work. “Within a few more generations, classical scaling and shrinkage will no longer yield the sizable benefits of lower-power, lower-cost and higher-speed processors that the industry has become accustomed to,” IBM said.

There is a number of answers to this dilemma IBM is planning to evaluate, including quantum computing, neurosynaptic computing, silicon photonics, carbon nanotubes, III-V technologies, low-power transistors and graphene.

IBM is close to making a deal with GlobalFoundries to sell its chip manufacturing business, Bloomberg News reported, citing anonymous sources. The buyer is interested primarily in intellectual property and IBM engineers rather than its manufacturing facilities.

Chip manufacturing is a costly affair, and getting rid of the money-losing business will help IBM's bottom line. Divestiture of underperforming businesses has been a theme at IBM, which is currently in the process of selling its x86 server business to Lenovo, the same Chinese computer vendor that bought its PC business a decade ago.

It is unclear how the GlobalFoundries deal may affect the OpenPower Consortium IBM launched together with Google, Mellanox, NVIDIA and Tyan in 2013. The consortium's goal was to license intellectual property tied to the Power processor architecture to others to stimulate development of an ecosystem around the architecture.

In addition to acting as a licensor of chip technology, IBM also acts as a licensee. The company licensed processor architecture from UK's ARM Holdings last year it said it would use to build custom chips for clients.

IBM may be selling its processor manufacturing operations -- a plan still unconfirmed -- given its various processor-related entanglements and the most recent $3 billion R&D program, it is clear that the company is not abandoning the chip business. It does, however, seem that Big Blue is changing its strategy in this space to one focused on creation of technology rather than manufacturing products.