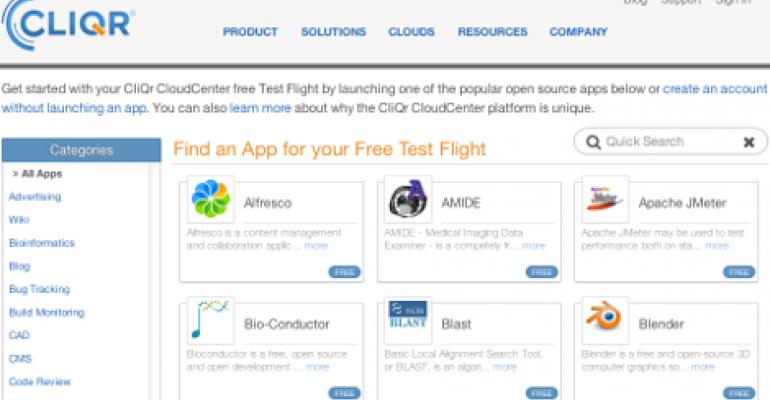 As they were working at VMware as key engineers on the giant’s vCenter cloud initiatives and watched the rise of the Amazon Web Services’ public cloud empire, Gaurav Manglik and Tenry Fu realized that while the heavyweights had built successful products on the infrastructure side of things, there was still a missing piece.

Moving applications into the cloud was too complex of an affair for enterprises to really embrace cloud infrastructure. They needed help with cloud orchestration. “Companies like VMware were doing a great job in the infrastructure layer but we needed something for app management on top,” Manglik says. “So we had that general notion and decided to leave VMware to start something in this space.”

The pair of engineers left VMware in 2010 and shortly thereafter started CliQr Technologies, where they built a solution that automates every aspect of cloud infrastructure needed for deployment and ongoing management of applications. Using the CliQr interface, a user simply describes their application’s topology and infrastructure requirements, and CliQr does the heavy lifting of provisioning the right infrastructure and deploying the app. The user picks from a list of supported cloud providers but their application will not be married to any one cloud they choose.

CliQr raised seed funding and an $8 million Series A round from Google Ventures and Foundation Capital and was one of the first cloud orchestration vendors to support Google’s Infrastructure-as-a-Service offering called Compute Engine when it came out. Series B is already in the bag, but Manglik, the company’s CEO, would not share the specifics before the official announcement.

There is a ton of cloud orchestration and automation startups promising the ability to easily deploy enterprise applications on any cloud. One that has gotten the most hype recently is Docker, whose solution packages applications in Linux “containers,” which can then be deployed on a variety of infrastructure types.

CliQr is different from Docker, Manglik explains. In CliQr, a Docker container is an image a user can plug into the application profile they create. “What Docker does is provide portability of containers across clouds,” he says. “What Docker does not do is the orchestration.”

A complex application that’s using Docker will typically have multiple containers, and deploying it still requires calls into cloud APIs (Application Programming Interfaces) to orchestrate infrastructure provisioning and configuration. Deployment of the Docker containers will need orchestration too. “That is something that needs to be done outside of Docker, and that’s what CliQr does,” Manglik says.

Cloud-borne in less than 15 minutes

A homegrown enterprise web application built on Java, for example, may have a topology that includes an Oracle database, a Weblogic application server, a load balancer and a NoSQL component. The user describes that topology through the CliQr UI, along with any data and data backup that needs to be plugged into the application and custom configuration requirements.

They describe interdependencies between all the moving parts and infrastructure requirements, such as the kind of storage, compute and networking resources and firewall rules. “All of that goes in a simple metadata profile,” Manglik says. Once the profile is created, the user’s job is done. After they specify which cloud they want to deploy in, CliQr picks up and does everything else.

CliQr has a number of preset profiles for some of the most common applications – Hadoop, High Performance Computing, Java web apps or Ruby on Rails workloads – and these can be deployed in the cloud within an hour.

Ultimately, the time to deploy depends on complexity of the application. “I personally on-boarded applications within 15 minutes,” Manglik says. The more complicated enterprise apps, such as Oracle’s Siebel Customer Relationship Management, may take two to three days, which is still a much shorter time than the weeks it can take a company to move them on their own.