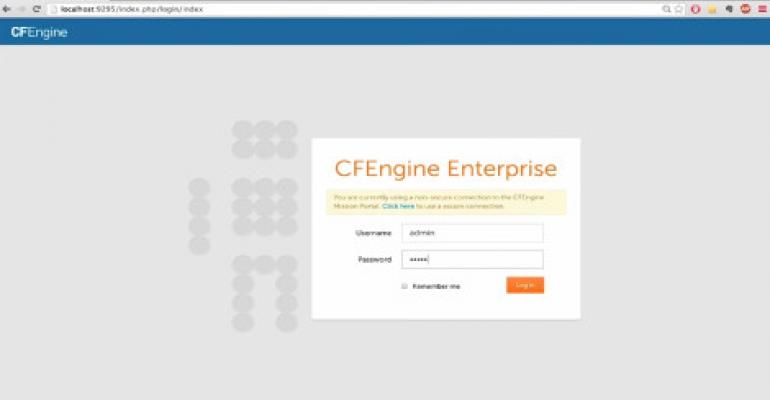 CFEngine has attracted numerous heavyweight customers, including LinkedIn and eBay, while generally flying under the radar.
Manage

With New Management On Board and Latest Release Out, CFEngine Gears Up for Growth

After years of flying under the radar, successful IT automation startup revamps go-to-market strategy and adds slew of new features

The IT automation space is filled with promising upstarts and popular names like Puppet and Chef. One of the oldest names in data center automation is CFEngine, which has been relatively quiet, flying under the radar. The company refreshed its executive team in 2013 and recently released version 3.6.0, adding a number of features customers were demanding.

Started in 1993 as a way for Mark Burgess to get his work done by automating a small group of workstations, CFEngine turned into a powerful tool that the likes of LinkedIn use to handle tens of thousands of machines. It’s been predominantly known in the industry as powerful but complex, but the company is working to change the latter part of the perception.

CFEngine is extremely lightweight. It's written in C and doesn’t have dependencies on "heavier" languages like Ruby and Python. It's highly distributed, highly scalable and fully autonomous. It provides continuous operations, self healing, agility and it has a good security record with zero vulnerabilities, according to Mahesh Kumar, vice president of marketing at CFEngine, said.

This has made CFEngine attractive to a wealth of large-scale customers. LinkedIn is the most cited, but other sizable customers include eBay, Localweb (hosting provider with more than 200,000 customers) Deutche Telekom, AT&T, AMD, Salesforce.com, the U.S. Department of Energy and Goldman Sachs. Its biggest customer has about 200,000 servers, according to the company.

The new executive team has been revving up the CFEngine's go-to-market strategy. The release of version 3.6 saw ease-of-use improvements like a visual dashboard for alerts and reporting. It also improved the ability to handle even larger web-scale architectures with better policy and compliance management.

“There’s magic happening. We are quiet but confident,” said Kumar, who himself joined as part of the exec refresh in late 2013. “We now have a seasoned executive team with a track record of success. We have consistently heard that we have a technical advantage from analysts, press and customers. However, we didn’t do a good job in terms of mindshare. Now we’re about focusing on the right things – you can have great technology but you need a good go-to-market strategy.”

Perhaps one reason the company has flown under the radar is that it hasn’t received massive funding rounds like some of its competitors have -- the company raised a $5.5 million Series A in 2011 -- but it hasn't really needed them. Without aggressive marketing, it still saw 70 percent growth in license revenue from 2012 to 2013.

The latest release introduced a visual alerts dashboard, which shows the entire infrastructure at a glance, including whether or not machines are adhering to compliance policies. Users can set policy, be alerted to drifts and deviations from the same, drill into and diagnose issues and take relevant and necessary remedial action on non-compliant elements in their environment.

Extensible visual inventory reports were added. Coding was made more efficient, resulting in a 90-percent reduction in required coding, according to the company.

“Customers said automation was good, but if there’s no control, I can’t handle it,” said Kumar. “We added more control. Customers wanted alerts and warnings, as well as a better way to visualize the environment, so we added it. For web-scale, we added a new Postgres SQL backend. We have a multi-hub architecture so you can spin up multiple hubs. There’s also vastly improved collection speeds."

CFEngine recently spun up 8,000 machines on AWS to see how it scales. Kumar said they quit at 8,000, not because it stopped scaling, but because there was no end in sight. “It would have kept going and been a big bill,” he said.

“Following heartbleed, we were able to patch 30,000 systems at a leading online merchant in a matter of hours," he added. "It can scale because [of] the extremely light footprint.”

CFEngine is sold in an open-core distribution model. The core product is open source and freely available but a swath of useful tools comes with a license fee and maintenance contract.

Some of the advantages of the enterprise edition include the Mission Portal GUI, which provides inventory management, auditing and compliance, real-time monitoring, alerts and reporting. The Enterprise edition gives the ability to define custom compliance policies, has cross-platform support and is integration-ready with many monitoring tools and portals, such as CMDB and Git.

What started as a simple tool in 1993 grew into a powerful tool as the years passed. Now it’s becoming more flexible and extending capabilities even further.

NoOps: IT Operations Getting Closer to Automated Future
Jan 07, 2022