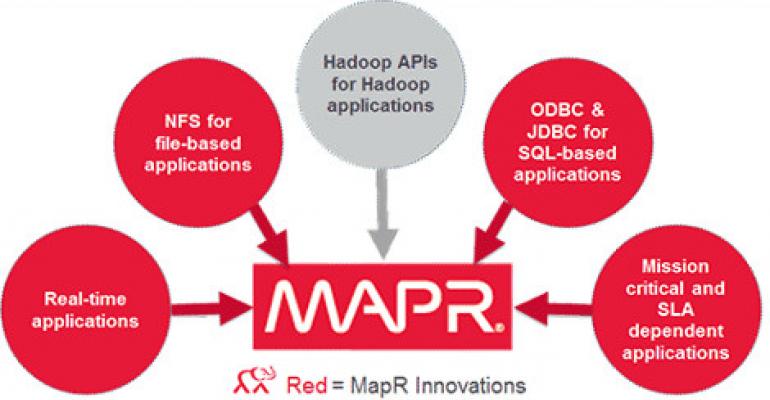 Despite Google abandoning MapReduce for its own new hyperscale analytics system, Google capital still believes in the technology and its prospects in the enterprise.

MapR Technologies, provider of one of the most popular distributions of Apache Hadoop, has completed $110 million in financing, including $80 million in equity led by Google Capital and a $30 million debt facility.

The company said it had tripled bookings in the first quarter of 2014, compared to 2013. The new funding will accelerate its worldwide go-to-market programs and deployment of its software as well as provide resources to continue engineering contributions to open source Hadoop software development.

By leading the round for MapR Google indicated that its recent announcement of a data analytics system that replaced MapReduce in its data centers would not be a lethal blow to the enterprise Hadoop market.

MapR has customers in financial services, healthcare, media, retail, telecommunications and Web 2.0 verticals and is said to be preparing for an IPO.

The Hadoop market is getting heated, with several competitors vying for the enterprise space. MapR's main competitors include Hortonworks and Cloudera.

Cloudera is backed by Intel and has raised more than $900 million in funding. Hortonworks is a spin-off from Yahoo, which formed the stand-alone company together with Benchmark Capital in 2011. Hortonworks closed a $100 million venture round in March.

MapR is arguably less open source than Cloudera and Hortonworks, based on proprietary file system and management technologies. The proprietary parts create some stickiness and helps to differentiate it with software focused on management and operations.

Google's Capital invested in the company, while Google the cloud service provider has stopped using MapReduce, technology at the core of Hadoop. Last week at Google I/O in San Francisco, the company announced Cloud Dataflow, a data analytics system it said could scale much better than MapReduce.

Hadoop is open source, however, and Cloud Dataflow is not, and the only way a company can use it is to pay Google for the service. If an enterprise customer wants a distributed parallel processing compute cluster of their own, going with one of the commercial Hadoop distributions, hardened with enterprise-friendly features, is still the best option, especially if they are not running queries against petabytes of data, which is the kind of scale where MapReduce starts to get sluggish, according to Google.

Where Cloud Dataflow may affect MapR is the customer base that is using the Hadoop distribution together with Google Compute Engine, the giant's Infrastructure-as-a-Service offering. The two are deeply integrated, and customers can deploy MapR clusters in the Compute Engine cloud.

"MapR helps companies around the world deploy Hadoop rapidly and reliably, generating significant business results,” said Gene Frantz, general partner at Google Capital who has also now joined MapR's board of directors. “We led this round of funding because we believe MapR has a great solution for enterprise customers, and they’ve built a strong and growing business.”

Qualcomm pitches in for Internet of Things

John Schroeder, CEO and co-founder of MapR, said Google had a long-standing commitment to Hadoop. "This investment round recognizes our customers’ rapid adoption, their tremendous results and ROI, and also the capital efficiency of our business model,” he said.

“It’s extremely gratifying to bring these high-caliber strategic investors on board, including Qualcomm who is the leader in the mobile ecosystem and also at the forefront of the Internet of Things, to help us accelerate growth and position the company for global leadership. Our installed base of more than 500 paying licensees provides a strong foundation and we are excited to move forward with the tremendous resources from our new and current financial investors.”

Albert Wang, director at Qualcomm Ventures, indicated that the company's investment in MapR was about the Internet of Things. “We invested in MapR because of the strength of its technology in leveraging the expanding Internet of Things and providing immediate business benefits."