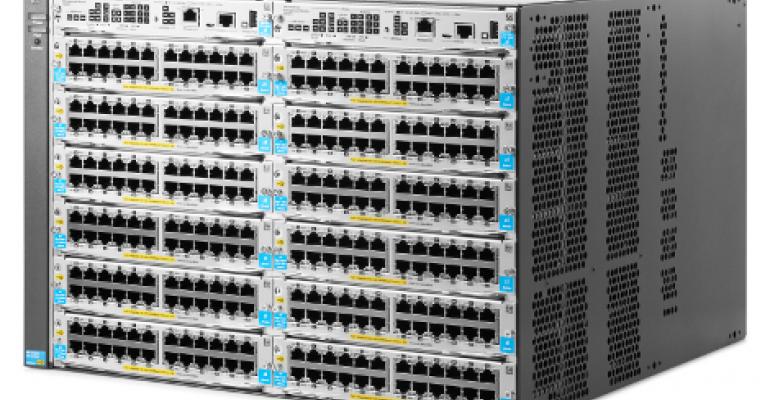 HP is going after customers who are upgrading their campus networks from 1 Gigabit Ethernet to 10GbE, with an eye on future support for 40GbE, Steve Brar, global product marketing manager for HP Networking, said. While global Ethernet switch sales have been flat compared to last year, be they data center or campus core switches, 10GbE and 40GbE products have been the sole growth engines in the market, according to IDC.

“This is definitely targeted at campuses who are transforming their networks,” Brar said.

HP is competing with all the usual suspects in this space, including Dell, Juniper and Alcatel-Lucent, positioning 5400R zl2 as an alternative to a product by the heaviest of the heavyweights – Cisco. According to Brar, the switch moves three times more packets per second at lower latency than the San Jose, California-based giant’s comparable Catalyst 4500 series switches.

HP’s previous-generation 5400 zl switches, the company’s first to support OpenFlow, were quite successful. The vendor launched the product line in 2007 (then part of its ProCurve family), but added OpenFlow support in 2012.

About 10,000 customers have deployed about 20 million ports of 5400 zl network capacity, Brar said. The new generation is compatible with the predecessor.

The company has been fleshing out its SDN strategy since 2012, and as it continues to do so the amount of things its OpenFlow-enabled gear can do will only grow.

At the moment, HP is offering two major SDN applications for 5400R zl2. One of them is Network Protector, a security app that runs on its Virtual Application Networks SDN Controller, launched last year.

Via OpenFlow, the app programs the switch to forward DNS traffic coming from wireless devices on the network to the controller, where the website the user is trying to access gets vetted, Brar explained. If the Protector decides that the site’s reputation isn’t up to snuff, the user cannot access it.

The other SDN app is Network Optimizer for Microsoft Lync, a video conferencing and instant messaging application. Dynamically and automatically, the application configures the network according to policy, setting quality of service for each Lync call as it takes place.