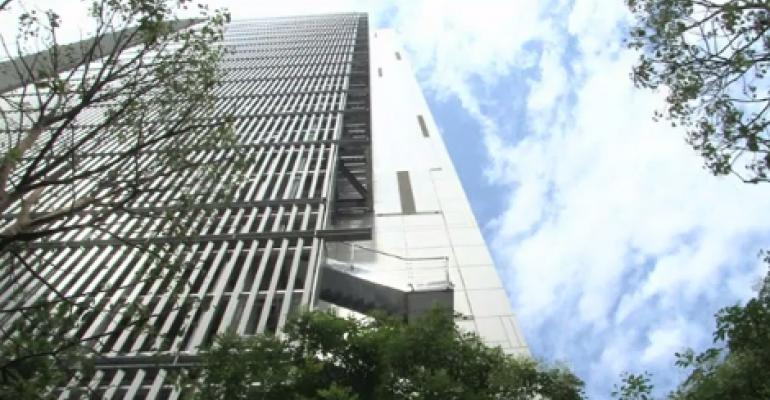 It has been more than three years since the Great East Japan Earthquake devastated the island country's northeast. Aftershocks of the disaster are still felt by the country's data center industry, continuing to shape its dynamics.

NTT Communications' expansion of data center capacity in Osaka -- way south of the area affected by the tremor -- serves as an illustration (in both location and design) of how the industry is being shaped by the event. Osaka is a quickly growing data center market in the country, second only to Tokyo.

The provider has recently kicked off construction of its Osaka 5 data center, which will offer approximately 3,700 square meters (about 40,000 square feet) of usable space (room for about 1,600 racks).

NTT Com is meeting growing concerns in Japan for unexpectedly powerful natural disasters and rising energy costs, which have led to rapidly increasing ICT outsourcing, disaster-recovery countermeasures and use of cloud computing. A growing number of financial and manufacturing companies are relocating headquarters or using facilities in Osaka to back up data centers in Tokyo.

"After the Great East Japan earthquake (March 11, 2011), many customers in Japan initiated a drastic review of disaster countermeasure and ICT outsourcing," said Sora Tanaka, who leads product sales and marketing for Nexcenter, an NTT Com data center services prand. "As a first phase, customers started to use colocation services and moved their systems outside of their owned building. Now, the second phase is starting. Customers are looking for the data center for their BCP site outside the Tokyo metropolitan area."

Tanaka says the company's existing space in Osaka will be out of stock after a few years, and that now is the perfect time to build. According to a report from Fuji Chimera, Tokyo currently accounts for 68 percent of the data center demand  in Japan and Osaka accounts for 26 percent.

"Osaka area is the second-largest economic center next to Tokyo, and many Tokyo-based companies have branches in the Osaka area," said Tanaka. "There is significant distance between Tokyo and Osaka, and customers can receive power from power company Kepco." (Kepco is different from Tepco, which was in the news a lot in the aftermath of the earthquake)

Ever more focus on seismic endurance

NTT has a process it uses when building. Construction and operating costs of the new data center are expected to be 30 percent lower than a comparable facility through use of an existing building foundation and adoption of what it calls a “mega-structure” design to reduce steel consumption while maintaining rigidity (building out a larger shell) and an efficient facility layout. The building is seismically engineered to withstand earthquakes equal to the Kobe Earthquake of 1995 or the 2011 disaster.

The data center  is six kilometers from Osaka Bay and three kilometers from the Yodo River, putting it at a safe distance from potential tsunamis, floods and high tides. The electric power equipment communication facilities, server rooms and other important facilities will be placed on the second floor in the unlikely event that water does reach the data center. Backup power and office space of about 430 square meters  could serve as business continuity area if a disaster were to strike Tokyo or another city where a customer has domestic operations.

The facility will be connected to company's Biz Hosting Enterprise Cloud via an SDN-supported colocation connection service, giving access to the company’s wider footprint. NTT will also provide connectivity services to Osaka 1 and 2 and its data center in the Dojima area, the Kansai region's major site for Internet exchanges. Direct connection of optical fiber will be possible through cable tunneling and proximity to the Dojima area.

Efficient air conditioning systems will incorporate water cooling, end wall injection air conditioning and outdoor air to reduce power consumption. It’s anticipated to be one of the most efficient facilities in the surrounding Kansai region.

Specs on par with Tokyo

The data center will be easily accessible from multiple railway stations and is within walking distance of many principal areas of Osaka.

"Demand is not only for Tokyo-based companies. It's growing on a national basis," said Tanaka. "Osaka-based companies also look for a data center that has the same specification levels of those in Tokyo, so we need to provide a  high quality data center which has high seismic capacity and directly connected to our secure earthquake-proof cable tunnel."