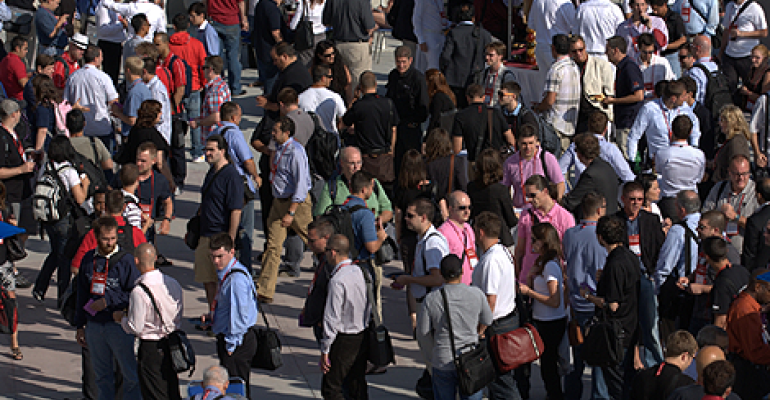 Attendees at HostingCon 2011, which was held in San Diego, California.
Business

From expectations of further consolidation to learning how to turn Amazon Web Services from threat to opportunity, today's hosting industry faces a lot of big questions

There are a few constants to HostingCon each year. The first is how the hosting industry will tackle Amazon Web Services’ dominance. The second is the continuing convergence of the industry – the distinct lines of shared, dedicated and managed hosting of yesteryear have all but blurred.

There’s always buzz about a major hosting acquisition or two. At this week's HostingCon in Miami (a 10-year anniversary of the conference), it was GoDaddy’s purchase of innovative hoster Media Temple and Peak 10’s acquisition by GI Partners.

The Media Temple deal spoke about the importance of matching cultures and transparency with employees for a successful merger, while Peak 10’s valuation answered some big question many people have had about the industry. There's a ton of mixed service providers in the mid market that are hard to gauge due to diversity of the business. Peak 10’s acquisition put a multiple on this type of business and potentially will spur more acquisitions in similar vein.

An attendee who wished to remain anonymous noted that with GI Partners owning ViaWest and Peak 10 and ViaWest's gradual expansion eastward, it's worth asking whether there a ViaEast could be in the cards? Maybe not. But it will be interesting to see how far GI Partners will take the potential for synergy. Peak 10 recently disclosed it was looking at two specific new markets.

There was general sense that the middle market is a major growth area at the moment, the section of the market populated with companies that have until now sat back and waited to see what worked with cloud and what didn’t. Startups and born-on-cloud companies have been driving cloud revenues, and enterprises have the resources to tackle cloud in meaningful ways, while the middle market was in wait-and-see mode.

Opinions diverged on which sectors within this market had the most potential. Phil Shih, of Structure Research, said he was seeing strong managed services growth, while GigaOm’s Ashar Baig said he expects massive consolidation and closures in the managed services world. Cloud revenue continues to grow well ahead of other services.

Shih noted that colocation growth has been slowing, from high teens it was once gaining down to low-to-mid teens. He argues that it is the industry’s maturity that is causing the deceleration rather than adverse pressure from outside players.

There are also new themes that have gained traction, namely data security and how the hosting business will fare after the NSA surveillance disclosures. “The next cold war is the encryption economy versus the surveillance state,” said Christian Dawson of ServInt and the Internet Infrastructure coalition.  Several tips on how to fight back were provided in a number of sessions. The industry clearly sees the surveillance disclosures as damaging to the U.S. hosting businesses.

Amazon: from threat to opportunity

In years past, AWS was seen as the biggest threat to the hosting industry. This year Antonio Piraino of ScienceLogic held a session on how to build a business providing managed AWS services. “Talking about working with AWS was almost taboo three-five years ago,” Piraino said. “Now you need an AWS strategy.” Piraino doesn't suggest going all-AWS for infrastructure, but rather offering a managed option for AWS for customers who are looking for hybrid infrastructures.

Companies like Datapipe offer managed AWS services alongside their own infrastructure offerings. Piraino argues that while many enterprises are looking to AWS, the majority of them don’t have the capabilities in house and look to a trusted advisor. This is an opportunity for hosting providers who can step in to help. Piraino has an interest in this, as ScienceLogic is a platform for advanced monitoring and could be a valuable tool in building these services.

The tools that AWS provides are fairly cut and dry and don’t provide the majority of what enterprise customers need, according to Piraino.

A new(ish) way for colos to look at cloud

A company called Atlantic.net has gone from being a dial-up provider to colo provider to cloud provider. A relatively small firm out of Florida, its reps spoke about how it began using cloud for temporary capacity for colocation customers, and how cloud grew into a product of its own. The company began offering its self-developed cloud to customers and saw tremendous uptake by colo customers, domestically and worldwide. What started as a service to add value to colo customers is now a major focus.

Adam Weissmuller, director of cloud solutions Internap, had a session on bringing cloud into the colo era. Internap is seeing two types of buyers: traditional enterprise IT customers looking to buy infrastructure for the entire organization and cloud buyers for a single application. Cloud buyers are typically end users, business units and developers. By offering both cloud and colo, it addresses both of these needs. There is a disconnect between the IT side and the business side, but through hybrid infrastructure in a single portal service providers can remote this disconnect.

While colocation customers still like to put servers close-by, Internap is finding that these same customers still care about location when it comes to cloud. Cloud also does not have much room for customization.

Colocation is cheaper on the whole for multi-year engagements and allows for high customization, but means a slower speed to market. Cloud lets those in an organization, typically referred to as “shadow IT,” get the agility they need within the confines of the IT contract instead of going outside.

Other providers, such as Interxion, maintained that they will not get into cloud, instead providing those services to customers via partnerships and building ecosystems.

Interxion said the colo business in Europe is doing extremely well, growing faster than growth in the low teens projected for the U.S.

JF van der Zwet, global marketing manager at the company, said that enterprises are the big opportunity going forward. All of the on-premises legacy deployments are undergoing tech refreshes and looking to colocation as the next evolution.

There isn’t a clear cloud leader in Europe because each country is its own unique market, but individual local cloud providers have been driving growth for Interxion.

He mentioned a joint partnership between Interxion, Dell and OnApp that allowed a customer to simply drop a cloud into an Interxion data center, build on Dell hardware and the OnApp platform. The product looks even more promising following OnApp’s federated cloud announcement, as it now provides a common data footprint.

Interxion also wants to help U.S. companies establish presence in Europe by introducing them to the right people and giving insight into the political landscape and tax regulations.