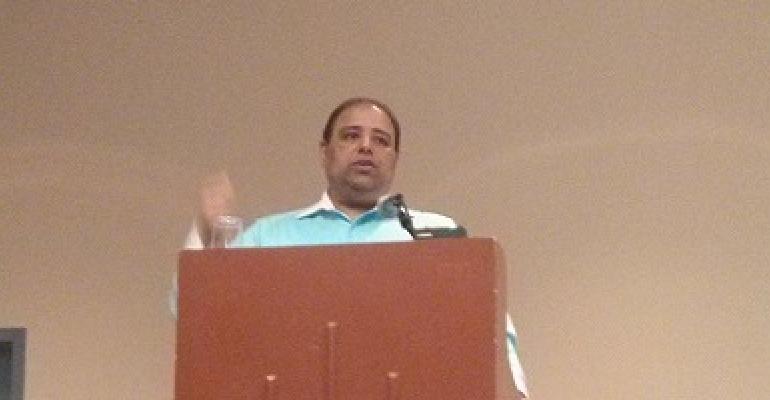 The cloud is a $160 billion market, and yet 80 percent of service providers in North America don’t offer cloud services.

The cloud is a $160 billion market, and yet 80 percent of service providers in North America don’t offer cloud services.

In a presentation Monday morning at HostingCon 2014, GigaOM research director Ashar Baig discussed cloud adoption trends as they apply to managed service providers, and said that in order to survive, service providers can’t be a “one-trick pony” and will have to bundle cloud services. They will also have to keep an eye on broader trends like the Internet of Things, wearables and robots, for example.

“A lot of you guys are concerned about day-to-day, but you have to be aware of these trends,” Baig says. “MSPs should stay abreast on these types of technologies and what is happening in the market.”

If service providers fail to adapt, the weaker ones won’t be able to stay in business as larger providers and telecos come into the market with a wide range of cloud services.

The MSP market is mostly break and fix type companies that Baig says will not be sustainable long-term as they try to compete on price in smaller, regional areas.

Cloud brokers, who compete with MSPs, sell all kinds of branded cloud services, and while the market is growing, Baig calls it a “stop-gap” until larger providers start offering the same services.

In terms of the larger cloud providers like Google, Microsoft and Amazon Web Services, it is pretty much a level-playing field, according to Baig. In fact, market share doesn’t really matter since the name of the provider is not one of the five decision criteria for enterprises or CIOs. And despite all of the public cloud price cuts, companies will soon choose their service provider based around their core competencies and what they bring to the table rather than what they cost.

Customer acquisition is a growing challenge for MSPs. Baig says service providers are looking for strategies to survive. One of those strategies, which many MSPs are using with success, is establishing two separate sales teams: one for new customers and one for existing customers.

According to Baig, bundling is very important for stickiness. In 2013, Baig says there was a lot of bundling from cloud providers, including backup, virtual disaster recovery and proactive network monitoring. The fastest growing areas in cloud are big data, mobile, systems management, backup/DR, IT helpdesk, and security, which remains a primary inhibitor of cloud adoption.

Baig says the reality is that people aren’t buying backup anymore, and that they want to buy DR as a service because it’s what “the CIO can relate to.” He says that MSPs are looking to provider higher value services because it is easier to sell disaster recovery instead of data backup.

“There will always be a need for mainframes, tapes, HDDs and private cloud,” he says.

This article originally appeared at: http://www.thewhir.com/web-hosting-news/hostingcon-2014-future-cloud-services-managed-service-providers-ashar-baig-gigaom