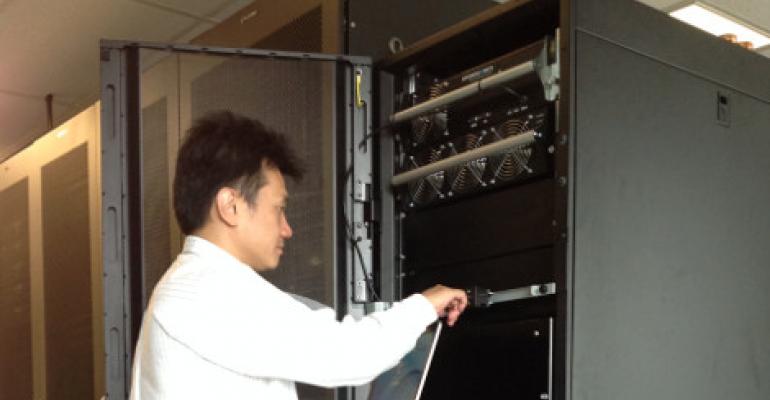 CommScope has launched an in-door hydrogen fuel cell backup power system that can be installed right on the data center floor at the end of an IT row.

The company is offering the solution as an environmentally friendly and space-efficient alternative to traditional diesel generators and battery cabinets, which require separate rooms in data center buildings.

Nearly all of the world’s data centers use generators for backup power. Fuel cells are a novelty in the data center industry, and while there is a number of companies that deployed the technology to supplement their power supply, completely abandoning the tried and true diesel gen-set in favor of the gas-fueled alternative will be a difficult sell.

CommScope’s pitch relies on the solution’s relatively small footprint, no greenhouse gas emissions and quite operation, as well as cost over time. The fuel-cell rack is as wide as a standard server cabinet and 6.5 feet tall, and the vendor says it can be installed on the data center floor with the hydrogen tank outside of the building.

The solution does produce heat and a small amount of water, the company said.

The system is built by CommScope’s partner Hydrogenics Corporation, which specializes in hydrogen-fueled power systems.

Hydrogenics CEO Daryl Wilson said space in data centers came at a premium and the solution took up much less of it than battery racks and other backup power solutions. “Operating expense is another growing concern for data centers and, depending on the configuration, the indoor hydrogen fuel cell solution can be a lower-cost solution than traditional power solutions after just two or three years,” he said.

Each rack can be configured to provide 10 kW, 20 kW or 30 kW of alternating current (AC). Multiple racks can be installed in a data hall, paired with uninterruptible power supply systems.

A number of service providers, including Verizon, AT&T, Equinix and CenturyLink, have bought fuel cells to supplement power in their data centers and to test the technology out. Examples of enterprise customers include JPMorgan Chase, Bank of America, Walmart and Coca-Cola.

These customers all bought natural gas-powered fuel cells from Bloom Energy, currently the biggest player in this niche market. Another Bloom customer is Apple, which is using the fuel cells to get a portion of the electrical load needed for its massive data center in Maiden, North Carolina.