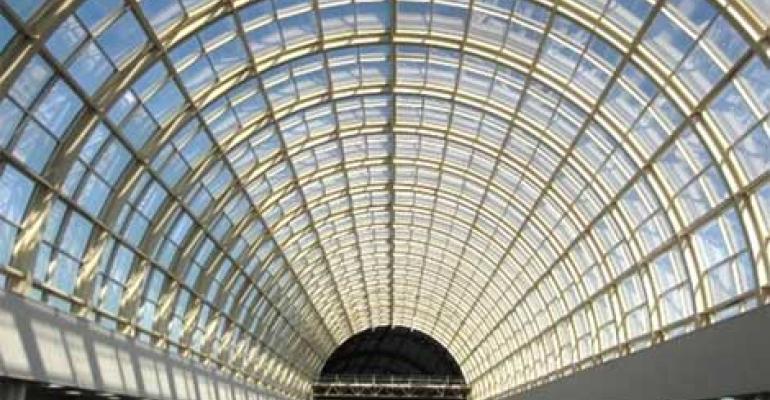 The Atrium of Infomart in Dallas, one of the most important network interconnection points in the southern U.S.
Colocation

Equinix has completed its sixth data center in Dallas – a key interconnection point for southern-U.S. fiber routes and for links to Latin America. The company is hosting a grand opening for the facility, launched earlier this year, today.

Among interconnection options at the new facility will be ExpressRoute, which will provide private network connections to Microsoft’s Azure cloud services.

The network aspect alone makes Dallas-Fort Worth an important point on the global data center map, but the market is also thriving because of a massive representation of the oil-and-gas industry and a favorable business-tax environment, Ryan Mallory, Equinix senior director and global solutions architect, said.

The new data center is an expansion of the company’s footprint in the Dallas Infomart, a highly interconnected building and a key carrier hotel in the Dallas-Fort Worth region. Equinix has had presence in the Infomart since 2000 and has continued to build out contiguous space there as it becomes available, Mallory said.

The company has brought online and commissioned Phase I of the new data center, called DA6, which has capacity for 450 cabinets and provides 1.3 megawatts of power. DA6 can accommodate three more phases of similar capacity.

From Dallas into cloud

ExpressRoute infrastructure at the facility is the next step in execution on a deal Equinix has made with Microsoft last year. Microsoft will use Equinix facilities around the world to bring direct links to its cloud services to 16 markets. The cloud provider has similar deals with a handful of other data center providers.

Big cloud infrastructure service providers usually build their own data centers or lease wholesale space to support their services. But they use colocation partners to expand the reach of their networks geographically. Private links to public clouds are especially attractive for enterprise users because they provide better performance and security than the public Internet.

Dallas is one of the first six Equinix locations that will host ExpressRoute. The others are Silicon Valley, northern Virginia, Chicago, London and Singapore.

“This will serve as the access point in that market for cloud-based services,” Mallory said. “It’ll be accessed through the Equinix Cloud Exchange.”

Microsoft is not the only cloud provider using Equinix to expand its reach. Amazon Web Services and IBM SoftLayer, among a number of other smaller providers, have also partnered with the data center services giant. SoftLayer colocates in some of the older Equinix space at Infomart, Mallory said.

Equinix has had a lot of success in the Dallas market and the latest build-out is a testament to that. “There’s definitely a demand there that allows us to continue to invest capital in that marketplace,” Mallory said.

Enterprise demand comes from the oil-and-gas industry as well as manufacturing companies. However, there is also growing demand from digital media companies, who use Dallas as a springboard to Latin America.