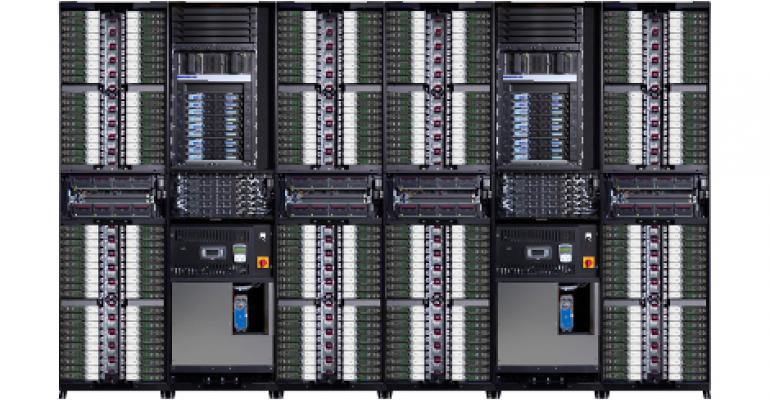 Hewlett Packard announced solutions which  enable a software-defined data center that is supported by cloud delivery models and built on a converged infrastructure that spans compute, storage and network technologies at its annual Discover conference in Las Vegas this week. The vendor positions its Converged System portfolio as pre-engineered validated solutions optimized for critical workloads, including virtualization, cloud and Big Data.

The company rolled out a new family of HP Apollo high performance computing (HPC) systems. The number of HPC systems ranked on the Top500 list of supercomputers in the world has been steadily growing for HP, with 196 of the Top500 in November 2013. As a converged solution the Apollo offering combines modular design with advanced power distribution and cooling techniques.

Three new offerings build on HP server architectures and address enterprise and scientific supercomputing. The Apollo 6000 system for the enterprise provides a selection of adaptors and power redundancy, allowing customization for specific workloads. With an air-cooled server rack design it can hold up to 160 servers per rack, giving a greater performance and efficiency in less space than a typical blade solution.

The Apollo 8000 system features patented technologies for a 100 percent liquid cooled supercomputer with built-in technology to protect the hardware. Built on a scalable rack design with up to 144 servers per rack, the system can offer four times the teraflops per rack compared to air-cooled designs.

"Leveraging the efficiency of HP Apollo 8000, we expect to save $800,000 in operating expenses per year," said Steve Hammond, director, Computational Science Center at NREL. "Because we are capturing and using waste heat, we estimate we will save another $200,000 that would otherwise be used to heat the building. We are saving $1 million per year in operations costs for a data center that cost less to build than a typical data center."

"Enterprises have seen the performance that flash can provide applications but have faced limitations that prevent broad use," said David Scott, senior vice president and general manager for HP Storage. "By driving down the total cost of all-flash arrays using innovations that also boost performance and scale, and backed by availability guarantees, HP has developed a solution that makes all-flash arrays viable for a wide range of mainstream enterprises and service provider use that represent an expansion of the addressable all-flash market by billions of dollars."

Going far beyond the first generation of all-flash systems, the 7450 array is able to scale to 460 TB raw and more than 1.3 petabytes of equivalent usable capacity. When combined with the 1.92 TB cMLC drive, the cost of storage is lowered to less than $2 per usable gigabyte. With this flash-enabled focus on total cost of ownership, HP joins a growing list of vendors pushing a solid state drive driven data center, while also taking aim at larger hybrid arrays such as EMC's VNX.

Using patented HP Adaptive Sparing technology, HP collaborated with SSD suppliers to extend usable capacity per drive up to 20 percent by reducing the amount of over-provisioned capacity typically reserved by media suppliers. HP is also backing the use of the 3PAR StoreServ Storage system architecture with a 6-Nines guarantee, which provides that customers with quad-controller or larger 3PAR StoreServ Storage arrays, including the all-flash 7450, will achieve 99.9999 percent data availability.