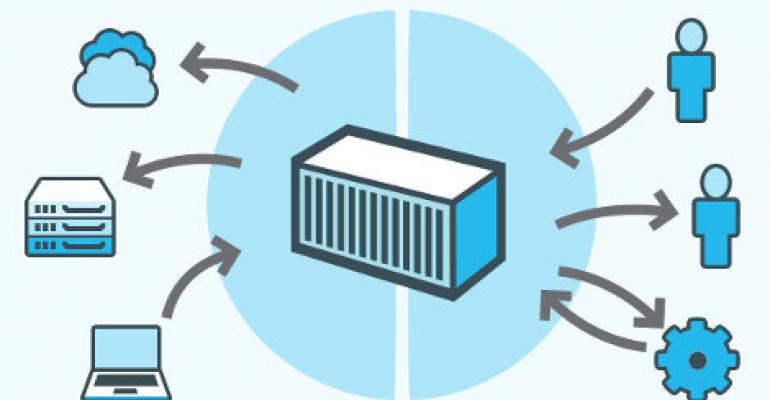 Docker aims at solving perhaps the biggest problem in IT today: how to move your apps from one place to another without breaking them? The company's answer is containerization, for which it provides a unique lightweight runtime solution.

Docker the open source project has hit a major milestone in just 15 months from its birth: Version 1.0 has been released, meaning it's ready for production deployments. Docker also  announced enterprise support packages and is hosting its first, and already sold-out, DockerCon in San Francisco this week.

The company provides enterprise training and support for the release. There are two tiers of support: the seven-by-24 premium tier and a standard package, which provides support during work hours.

Docker is OS virtualization, a level up from hypervisor virtualization. It is an open platform for developers and sysadmins to build, ship and run distributed applications. It consists of two major pieces: the Docker Engine, the container standard that helps build, ship and run distributed applications built on Docker, and Docker Hub, a cloud-based service  that acts as a repository for users content and workflows.

Docker enables applications to be quickly assembled from components and eliminates the friction between environments.  As a result, IT can ship faster and run the same app, unchanged, on laptops, virtual machines running in an in-house data center, or the cloud.

Since its inception 15 months ago, the open source project has seen unprecedented community growth and adoption, including more than 2.75 million downloads, 95 percent of contributions coming from outside of Docker the company, more than 8,500 commits and 6,500 Docker-related projects on GitHub.

Scott Johnston, senior vice president of product at the firm, said app mobility problems have been "bedeviling" IT professionals for decades. “Unless you catch everything, there’s always something that breaks,” he said.

Shipping an application to a server is hard, and there’s been tremendous investment on the part of tech giants to try and solve this issue. Docker took a grassroots-movement approach to it and has succeeded in involving a lot of community effort, including participation by IT software heavyweights.

“We’re from the school of container technology which we simplified along with the packaging and shipping of the container,” said Johnston. “There’s been 15 months of rapid innovation. There’s over 440 contributors to the project, including lots of contributions from Red Hat, Google. A lot of rapid change is going on.”

All the big cloud players already support or will announce support for Docker. Amazon's cloud embeds Docker in its Linux and there’s Docker support for its Platform-as-a-Service offering Elastic Beanstalk. Rackspace and Google both support it with their Infrastructure-as-a-Service and PaaS products. Red Hat is embedding it in RHEL 7,  and the open-source PaaS community Cloud Foundry supports it as well.

How did such an old issue get solved in 15 months? Johnson said it was because Docker became an impartial aggregation point for tech minds to meet and solve the problem. “It also comes from founder and CTO Solomon’s [Hykes] background being close to this issue," he said.

"He started as system admin on the operations side.  He saw the same problem in the configuration management space. The genesis was: what if we took another view of the golden image – some people call it 'golden tarballs' because they frequently got out of date, etc. We asked ourselves, what if we made it a fine-grained control. It came from a very true place."

In a statement, Hykes said, “We’d also like to salute the many enterprises that ignored our statements about ‘production readiness’ and deployed Docker in prior releases. Your bravery (and unvarnished feedback) has been critical as well.”

Docker touches on several of Data Center Knowledge’s cloud predictions for 2014: namely the one that said open source was moving from alternative to prime time, and the one that forecasted a take-off of container technology as an easy way to spin applications up and down.