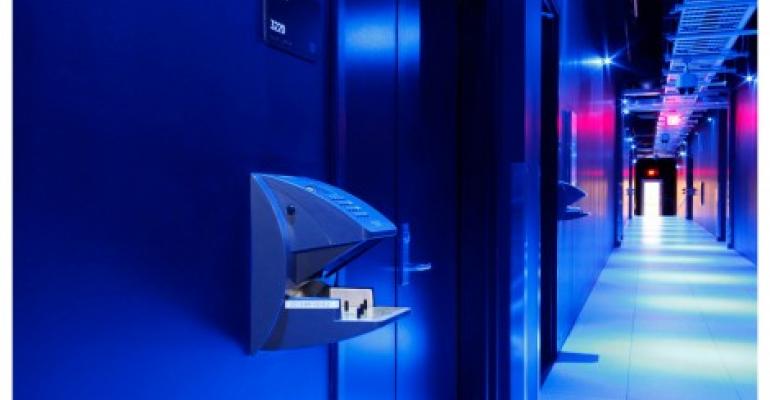 Outside one of the Business Suites in Equinix&#8217;s DC10 data center in Ashburn, Virginia. (Photo by Equinix)
Colocation

Equinix in Ashburn: Refining the Old, Testing the New

Business Suites prove themselves as successful product on the company's recently completed campus in northern Virginia.

ASHBURN, Va. - Equinix has gotten its template for a data center down to a science, and its latest DC10 and DC11 facilities here show a few modifications that hint where the company's designs are headed in the future. DC10 represents a move away from traditional retail colocation with the introduction of Business Suites, while DC11 shows refinements of previous designs on the campus.

Instead of cages, DC10 is divided into suites, or pods, that act as dedicated rooms and data centers. A recent tour revealed that all inventory in this facility is sold out except for two smaller pods. Most rooms are four times the size of one of the empty pods. One of the most recent takers of a Business Suite was Data Foundry.

The Business Suites marked a departure from the traditional Equinix retail model. The A La Carte offering isn’t targeted to retail nor wholesale, it sits in the middle. The revenue per square foot for wholesale isn’t attractive to Equinix because it does not fit the company’s business model. While Business Suites have been a success, they will primarily serve to compliment retail colocation in certain markets or be a way for some customers into emerging markets.

The pods are well suited to those undergoing a lot of consolidation or a tech refresh. They are also aimed to compliance- and security-minded customers that still want the "Equinix experience," but with more privacy, control and flexibility. The only shared infrastructure is power and backup, and even then it’s only possible to have up to four customers on one backup generator.

In addition to Ashburn, Equinix is building out Business Suites in Secaucus, New Jersey, set to open in 2015. The next logical step is the West Coast.

"The Business Suites [offering] in DC10 opens up the conversation to a new range of customers," said Bryson Hopkins, senior manager, Global Solutions Architects, at Equinix. "Most customers can’t grow too big to completely exit Equinix. Even social media giants that have outgrown retail colocation space still keep something in the campus due to its connectivity. Our sweet spot is still interconnection."

Inside a Business Suite in DC10

Footprints for these suites begin at 281 kVa, 2,200 square feet -- enough for roughly 85 cabinets -- the lower-end of the range where retail colocation and wholesale data center providers frequently compete for customers.

An empty pod has no overhead gear. Equinix builds this out once a customer decides how they want to configure the space. Suites are customizable – the space can be utilized for racks or office space. Some customers even post their own security guards.

While DC10 is a complete departure from business-as-usual for Equinix, DC11, the final building on the company's Ashburn campus, represents the most current iteration of the traditional retail colocation facility design after years of evolution and refinement.

The building is two stories. The mezzanine level houses uninterruptible power supply systems, freeing up space on the main level, where the colocation floor is. Mesh patch panels, filled with connectivity options outside of the cages is a standard sight for an Equinix facility. The panels make it easy to set up cross-connects without the provider's staff having to physically enter the server banks. “We pre-wire the gear,” Hopkins said. “It’s particularly attractive to banks and high-frequency traders – businesses where packet transmission is sensitive.”

The facility also has accommodations for larger racks and an executive briefing center. It is slab floor with higher ceilings. You can see the company experimenting with plenums in some empty space to try and further optimize airflow. DC 11 looks like it’s filling up fast.

On the mezzanine level, a company called Datatility has set up an office specifically to work with Equinix customers, which illustrates Equinix's focus on building an ecosystem within its data centers.

Equinix customers seem to relish the opportunity to announce their presence. Some more visible signage includes government and enterprise hosting specialist Carpathia, who put up a sign in the line of sight of the executive office across from its floor space. Game event streaming company Twitch has splashed its branding on its server racks.

Changes that will stick

With completion of the Ashburn campus Equinix has further refined its data center template. Saving floor space by housing power infrastructure on a mezzanine level is a refinement it plans to keep, and the Business Suites experiment has been a success, offering a big addition to the company's business model. This is important now, because Equinix already has a lot of retail colo footprint in the major U.S. markets, where further expansion opportunities may lie outside its traditional comfort zone.