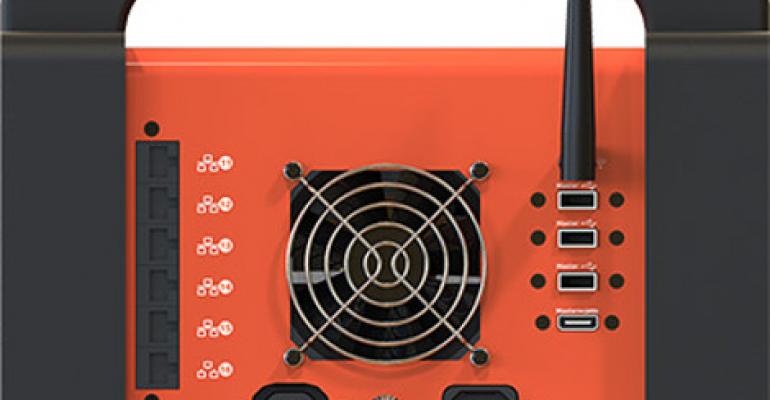 Canonical and Ubuntu in the OpenStack Landscape

Company behind Ubuntu sees more OpenStack clouds running in production, shows off performance of its OpenStack distro on supercomputers and microservers and rolls out the Orange Box - a complete OpenStack cluster in a box for proof-of-concept projects

Canonical, famous for its distribution of the Linux operating system called Ubuntu, has also been very active with the popular open source cloud operating system OpenStack. The company announced a number of things at the OpenStack Summit in Atlanta this week. Some announcements demonstrated the strength and speed of Ubuntu on OpenStack at hyperscale and some were aimed at making it easier to adopt OpenStack and improving interoperability.

“There’s a lot of talk interoperability, ecosystem and speed this year,” Mark Baker, Ubuntu Server and Cloud product manager, said. Ubuntu has been closely tied to OpenStack from the beginning, acting as reference OS throughout the cloud infrastructure software's development. It is still a large part of the landscape: a survey at the close of the summit revealed that the Ubuntu platform was on more than half of OpenStack deployments.

The big difference between previous conferences and this year’s, according to Baker, was the makeup of attendees. "Previous events were biased toward vendors and technology companies. We were all sitting around collaborating, but there was a lower percentage of real users in the past. The balance has swung the other way now, where the users dominate."

Not only is OpenStack drawing real attention from users, these users are also more and more frequently running OpenStack in production environments. “We’ve had a lot of customers building clouds [with] 20 to 50 nodes," Baker said. "We have now seen in the last six months a huge rollout on the part of many, pushing it up to 200-400 nodes. There’s a level of comfort there that they can run it into production.”

Canonical has had a lot of uptake for Ubuntu on OpenStack. “We worked closely with the early adopters in the telecommunications space: Orange, NTT, ChinaTel, etc. We are strong in that space. We’re making good headway. We’re also seeing a push into financial services, like Wells Fargo, through integration with VMware. We’re more of a natural ally for VMware.”

That is because Canonical's approach is one of working with other vendors, focusing on interoperability, complementary technologies and taking an overall ecosystem approach. This is an alternative to building a tight “enterprise stack,” where the sell is one vendor building many components, tightly integrated.

At the summit, the company introduced The Orange Box, which is a complete mobile Ubuntu OpenStack cluster with 10 nodes, 4 cores, 16GB of RAM and SSD storage, to deploy infrastructure on premises for testing or proof of concept. The goal is to get companies up and running with OpenStack easily.

“It can be tricky building an OpenStack cluster in an enterprise,” Baker said. “You need a bunch of machines, and there are different groups, different teams negotiating. It’s hard in an organization to get started. This box was designed to help them. It will bring them up with an OpenStack sandbox. It’s very much part of our jumpstart program.”

There is also a new jump-start program: a two-day Ubuntu OpenStack training course using Orange Boxes."We’ve been offering training for a little while but the main addition is the Orange Box. We want to continue to drive the adoption, continue to make it easier for enterprises to get up to speed.”

Ubuntu’s Juju orchestration tool and MAAS (Metal as a Service, a provisioning construct created by Canonical) will now support Windows guest images and CentOS.  “The key part is it can now orchestrate services on other other operating systems ... and deploy services onto OpenStack," Baker said."Using the same tool becomes extremely powerful. Customers are wise to interoperability. When they choose cloud technology they’re making a choice that will have a big impact on the next five to 10 years.”

Canonical also demonstrated Ubuntu running on 64-bit ARM processors. The company is also working closely with IBM Power architectures, as well as other collaboration with IBM in general. “OpenStack is growing rapidly. Clearly Intel is the dominant processor of choice, but there’s a diverse community out there. Some are going to want to have choice of architectures.”

The company is also now offering fully managed OpenStack, with infrastructure, tools, software support and monitoring at $15 per host per day. “What we provide is the expertise and people to build, manage, scale and continue to manage it,” Baker said.

Canonical made a number of announcements that demonstrate high performance of infrastructure running its OpenStack distribution. The company said that the world’s fastest supercomputer, Tianhe-2 at the National University of Defense Technology in China, is running Ubuntu OpenStack, and announced a record benchmark for hyperscale computing.

AMD broke industry records running Ubuntu OpenStack on its SeaMicro servers, deploying 75,000 virtual machines in 6.5 hours, which it said was the fastest yet for OpenStack.