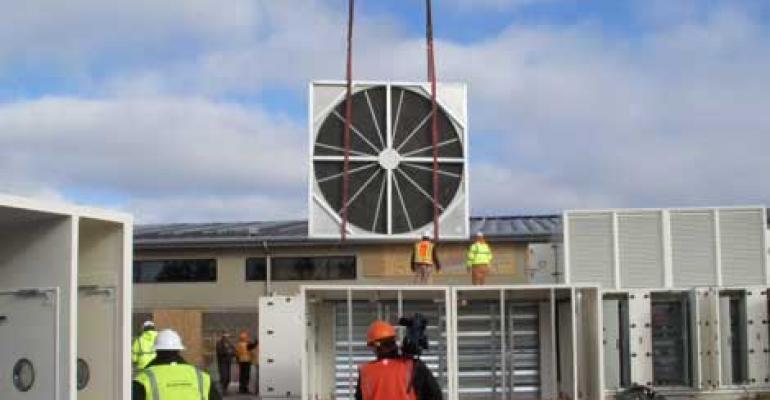 BendBroadband&#8217;s data center in Oregon is cooled by a Kyoto Wheel
Design

Telephone and Data Systems, parent of TDS Telecom, announced a plan to acquire BendBroadband for $261 million.  BendBroadband serves Bend, Oreg., and surrounding areas with a range of broadband, fiber connectivity, telephone and cable television services. Also included in the deal, however, is a data center that provides colocation and managed services called BendBroadband Vault, a LEED Gold and Energy Star certified facility.

The Vault tries to get as much power as it can from solar, with panels installed on its south-facing roof. These 624 solar cells are capable of generating 152 kilowatts of power, which equates to more than 16 percent of total power usage on a sunny day.

The facility uses a passive cooling system. It effectively gets free cooling 75 percent of the time through a 12-ton wheel from KyotoCooling, called a KyotoWheel. The facility uses outside air in a closed loop to cool the heat wheel. The building also has a flywheel-based Uninterruptible Power Supply (UPS).

TDS said it will retain the BendBroadband name as well as its 280 employees. Privately held, BendBroadband said its 2013 revenue totaled $70 million.

"TDS is a longstanding, family-controlled company that shares our commitment to our customers, our employees and our communities," Amy Tykeson, president and CEO of BendBroadband, said. "With TDS, we will keep hundreds of good jobs in Central Oregon."

BendBroadband’s roots go back to 1955, when it was a cable TV provider known as Bend TV Cable. It captured TV signals that made it across the Cascades and distributed them around the Bend area. It moved into internet services in 1997.