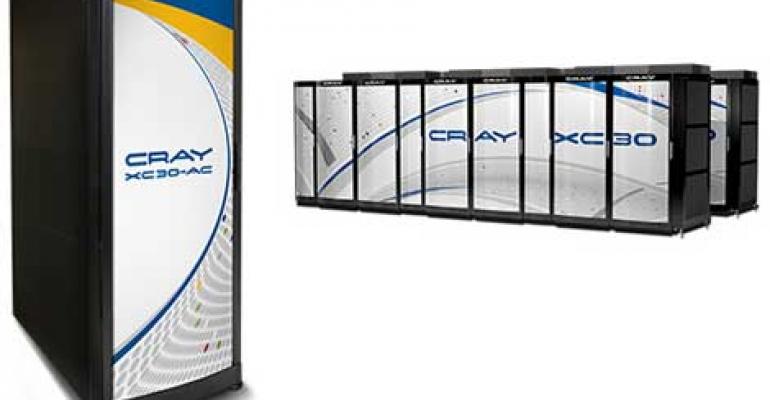 Cray announced that it has been awarded a $70 million contract to provide a next-generation Cray XC supercomputer to the U.S. Department of Energy's (DOE) National Energy Research Scientific Computing Center (NERSC).

Cray has been awarded a $70 million contract to provide a next-generation Cray XC supercomputer to the U.S. Department of Energy's (DOE) National Energy Research Scientific Computing Center (NERSC). The new system, named Cori after bio-chemist and Nobel Laureate Gerty Cori, will help support more than 5,000 scientists annually on more than 700 projects in the areas.

"We are proud of the history we've built with NERSC, and we are honored that the Center, along with the Department of Energy's Office of Science, has once again turned to Cray to support the future computational needs of their large user community," said Peter Ungaro, president and CEO of Cray. "This is a significant contract for our company as it demonstrates that our roadmap for the Cray XC family will continue to lead the industry well into the future. The researchers and scientists at NERSC are focused on solving a wide range of challenging problems that demand high levels of performance and reliability across a broad spectrum of scientific applications. We look forward to working with NERSC and putting our future technologies to the test as part of the Department of Energy's leading-edge scientific research and discovery program."

"We are excited to continue our partnership with Cray," said Sudip Dosanjh, Director of the National Energy Research Scientific Computing Center at Lawrence Berkeley National Laboratory. "Cori will provide a significant increase in capability for our users and will provide a platform for transitioning our very broad user community to many core architectures. We will collaborate with Cray to ensure that Cori meets the computational and data needs of DOE's science community."

With over 9,300 Knights Landing compute nodes, the Cori supercomputer will also feature an option for a “Burst Buffer,” a layer of NVRAM that would move data more quickly between processor and disk, allowing users to make the most efficient use of the system while saving energy. The Knights Landing processors will have over 60 cores, each with multiple hardware threads with improved single thread performance over the current generation Xeon Phi co-processor. The processors also features on-package high bandwidth memory that can be used either as a cache or explicitly managed by the user.

"We are thrilled to work with Cray in bringing the next generation of highly parallel supercomputers to market based on the Intel Xeon Phi processor - codenamed Knights Landing," said Charles Wuischpard, Intel's Vice President, Data Center Group and General Manager, Workstation and High Performance Computing. "Working closely with Cray, we will deploy the Many Integrated Core (MIC) architecture on the next generation Cray XC supercomputer, delivering over 3 teraflops of performance per single socket node to power a wide set of applications and taking an important and viable step towards Exascale."