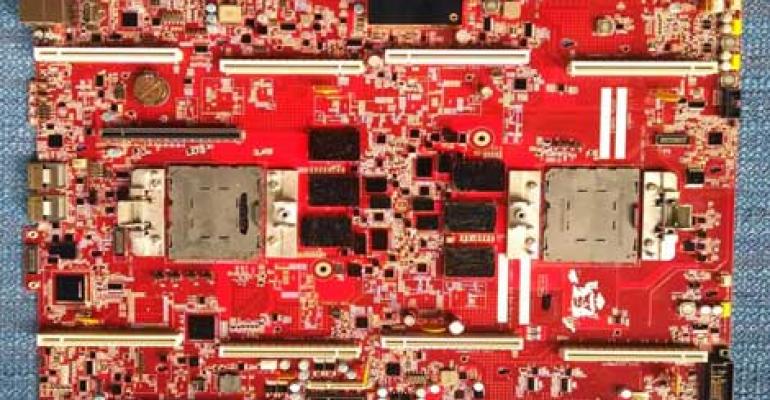 Google has developed a motherboard using POWER8 server technology from IBM, and is showing it off at the IBM Impact 2014 conference in Las Vegas.

Google has developed a motherboard using POWER8 server technology from IBM, and is showing it off at the IBM Impact 2014 conference in Las Vegas this week. The new motherboard is an outgrowth of Google's participation in the OpenPOWER Foundation, a non-profit developing data center technology based on the POWER Architecture.

Google's display of a POWER8 motherboard is notable because the company builds its own servers by the tens of thousands, and POWER could represent an alternative to chips from Intel, which is believed to provide the motherboards for Google's servers. Gordon MacKean, senior director of hardware for Google and chairman of the OpenPOWER Foundation, shared an image of the motherboard on Google+ this week.

"We're always looking to deliver the highest quality of service for our users, and so we built this server to port our software stack to POWER (which turned out to be easier than expected, thanks in part to the little-endian support in P8)," MacKean writes. "A real server platform is also critical for detailed performance measurements and continuous optimizations, and to integrate and test the ongoing advances that become available through OpenPOWER and the extended OpenPOWER community."

Last week the Open POWER foundation announced that its members had developed its first "white box server," comprising of a hardware reference design from Tyan and firmware and operating system developed by IBM, Google and Canonical.