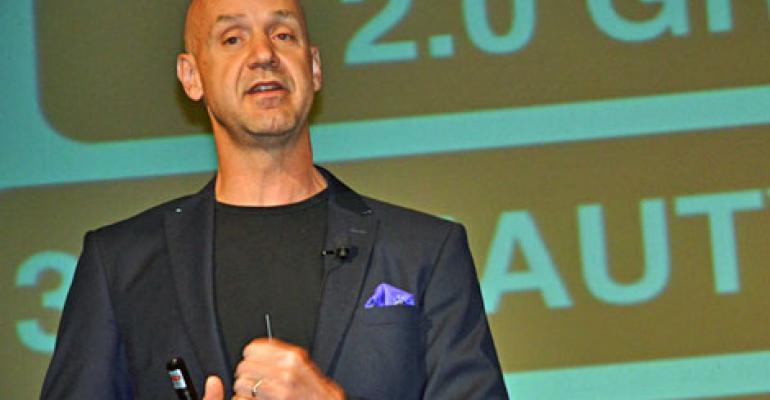 LAS VEGAS - Data center technology innovation needs to be freed from the prison that has been created by the real-estate-driven thinking that prevails in the industry.

That is according to Scott Noteboom. The industry veteran, who in the past ran data centers for Apple and Yahoo, delivered a keynote address Tuesday morning at the Data Center World conference.

Data centers have traditionally been built with life expectancy of 15-20 years, over which period the “real estate asset” depreciates, Noteboom said. The infrastructure systems inside are treated as part of this asset, on the same depreciation schedule.

This 15-year-depreciation mindset is the reason power and cooling infrastructure technology has not evolved much over the past 50 years, Noteboom said. “Is the data center truly the static thing that must remain the same for 15 years?," he said. "If it is, to the technology guys it’s a prison."

Faster Innovation at the Device Level

End-user devices, such as smartphones and tablets, evolve every six months, and IT hardware in data centers gets refreshed about every three years. Innovation in hardware, however, has been inhibited by the static nature of the data center.

“Imagine how frustrating that is for a technologist,” Noteboom said.

This is why he is a proponent of thorough disaggregation in the data center: separating the IT and the supporting infrastructure from the building itself. The inspiration for the idea came from visiting massive manufacturing plants in China operated by Taiwanese electronics makers Foxconn and Pegatron, as well as a BMW factory in South Carolina.

One of these companies’ most important design principles the ability to build these plants anywhere in the world, quickly, simply and affordably. Another one is for the plants to be able to support production of products 30 years in the future without knowing anything about what those products are going to be like.

One of the ways to achieve these goals is to separate construction and management of the building from design and installation of the infrastructure. The buildings themselves are very simple, and everything that has complexity, such as cooling, electrical and network infrastructure, is managed by different teams, entirely separate from the real estate teams, Noteboom said.

Disaggregation in the Data Center

But he is a proponent of even further disaggregation – the type of disaggregation Intel, Facebook and Facebook’s Open Compute Project have been talking about. The idea is to make every component of a server individually replaceable and upgradeable.

Intel’s Rack Scale Architecture, for example, is a chassis that provides shared power supply, cooling fans and interconnect to however many CPU cores, memory or network interface cards the user chooses to install. When time comes to swap out a CPU, the user does not need to replace an entire server.

Whether these were the kinds of things Noteboom is cooking up at LitBit, the company he started after leaving Apple in 2013, he would not say. He said he was trained by Apple not to talk about anything you were doing until you had something great to talk about, and has decided to keep things under wrap at LitBit until the time is right.

Npteboom does say he has been spending a lot of time in Asia lately, and the region’s data center market has dominated his interviews and speaking engagements. Massive growth in the number of internet users in Asia will drive rapid data center capacity build-out, which is where Noteboom sees opportunity for applying expertise of the US data center industry.

Noteboom spent two years as head of infrastructure strategy, design and development at Apple. For six years prior to that, he was vice president of data center engineering and operations at Yahoo. He got his start in the data center industry in 2000, when he ran operations for colocation provider AboveNet.