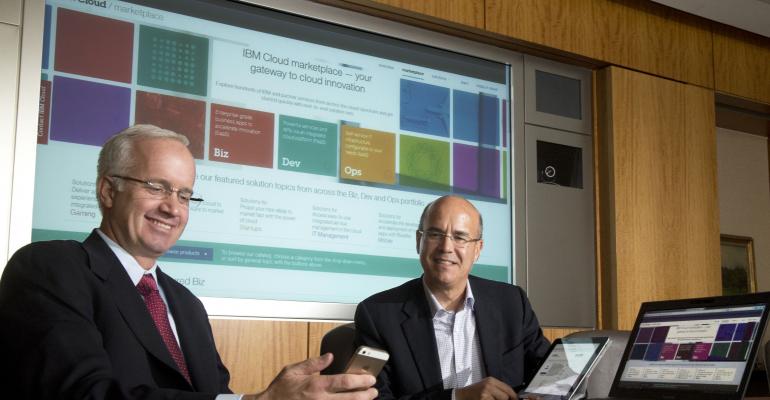 IBM is launching a cloud marketplace, which will bring its steadily growing portfolio of services and third party offerings together for one-click cloud shopping. The marketplace provides extra incentive for those developing on BlueMix, giving them an avenue to sell their applications to a large audience, once completed.

IBM is launching a Cloud Marketplace, making much of its software and services portfolio available with one click of a mouse and the swipe of a credit card. It’s a big way to lower the barrier to entry for customers, as well as to educate them about what’s available. It also greatly helps IBM's BlueMix cloud platform, as it gives developers building cloud apps in BlueMix a marketplace to ultimately sell their wares.

The addition of a cloud marketplace is more momentum for IBM’s aggressive cloud march towards assembling a comprehensive cloud portfolio.

The marketplace was created to help enterprises ease the transition to cloud and speed the adoption of "hybrid" clouds. The new cloud marketplace will initially offer hundreds of services ranging from Big Data analytics, to security, to mobile including cloud app and solution providers such as Zend, SendGrid, MongoDB, NewRelic, Redis Labs, Sonian, Flow Search Corp, Twilio, Ustream and many more.

IBM is making some serious investments in cloud computing. It's investing more than $1.2 billion in a global data center expansion for SoftLayer, while another $1 billion is going towards Blue PaaS. Meanwhile, the company has spent over $7 billion in 17 acquisitions, including recently Aspera, Cloudand, and Silverpop.

While IBM missed its revenue expectation last quarter, it is in a period of transition to becoming a cloud powerhouse. The revenue numbers for cloud show that this transition is working, with 50 percent cloud revenue growth for the first quarter of 2014, following a year in which its cloud revenue clocked in at an all-time high $4.4 billion. The question is whether the cloud progress will offset struggled in other areas of IBM's business.

IBM is also accelerating its expansion of the BlueMix open cloud platform, which has already won a nice list of customers who have built cloud applications in the first 60 days of open beta. The new cloud marketplace is strategically important to BlueMix, which offers an entry point for developers to build and test applications in a sandbox-like environment before potentially offering them for sale in the IBM Cloud marketplace. IBM has offered a place for these developers to sell what they make through a cloud marketplace that will start with a healthy audience on day one.

IBM is launching more than 30 new services in BlueMix around growth areas such as Big Data & Analytics, Cloud Integration, DevOps and Internet of Things.

IBM is also working with partners such as Galvanize to provide a collaborative physical space for startups and developers to work together, build and test applications in an accelerated environment using agile development methods and best practices. IBM’s first BlueMix Garage Lab will be located in San Francisco at Galvanize where BlueMix members will work side by side with IBM consultants and partners such as Pivotal Labs to iterate quickly on new innovations.