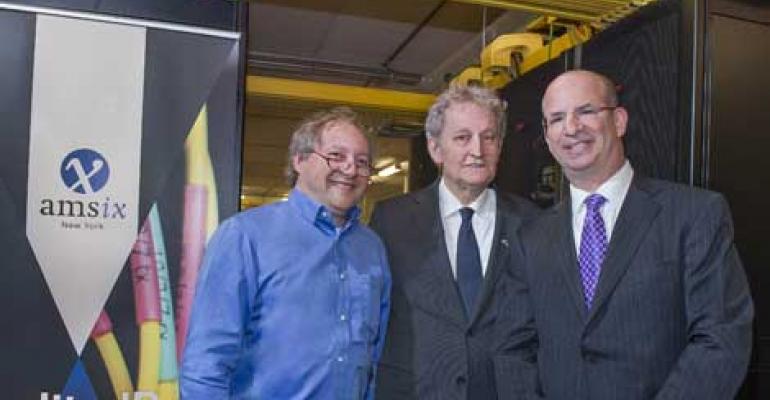 The first crop of Open-IX certified data centers are popping up this spring. AMS-IX has opened its doors at Intergate.Manhattan, and EvoSwitch and Continuum both achieved Open-IX certification.

It's been a busy week for data center providers focused on the Open-IX opportunity. EvoSwitch, home of the first London Internet Exchange (LINX) node in the U.S., has received Data Center Technical Standards certification from Open-IX  for its WDC1 data center in northern Virginia. Chicago provider Continuum has also received Open-IX certification.

As a refresher, Open-IX is a different approach to existing Internet traffic exchanges. Rather than being concentrated in a few select facilities, Open-IX  adopts the European nonprofit model in which exchange operations are spread across multiple data centers within a geographic market. The goal is to create a new network of Internet Exchange Points housed in multiple neutral data center facilities that allow participants to interact and exchange content.

The first Open-IX certified facilities are now popping up. CyrusOne was the first to achieve certification. OIX standards are already being adopted by LINX, AMS-IX, Digital Realty, DuPont Fabros, and many other data center and IX providers.

The opening ceremony was attended by Eberhard van der Laan, Mayor of the City of Amsterdam, as well as officials from Sabey and AMS-IX. "“Historically, the Dutch people are global trading leaders," said van der Laan. "We were the first European settlers to come to this island, and we named it New Amsterdam. Today, I envision the same business potential here that my ancestors recognized – New York City as a global center of the new Internet economy.”

"I strongly believe that a distributed exchange model offers the best value by enabling a choice of connectivity options in as many data center locations as makes business sense," said Job Witteman, CEO of AMS-IX. "In Amsterdam, the AMS-IX exchange platform is currently distributed over 12 different data centers serving well over 650 IP networks from around the globe, making it the largest Internet exchange in the world.”

“We are very happy to partner with AMS-IX New York on this important market-changing initiative," said John Sabey, President of Sabey Data Centers. "Offering more choice in the New York City market to carriers and customers is good for everyone.”

EvoSwitch is an Amsterdam-based provider that first entered the U.S. market in 2012, leasing space in the COPT building in Manassas. The facility is outside of the major data center cluster in Ashburn, meaning it stands to benefit from adoption of the European exchange model. EvoSwitch has built its story around connectivity, and was the first company to land a LINX node in the states.

“We are very pleased to receive recognition from Open-IX for our data center operations in Virginia,” said Eric Boonstra, EvoSwitch USA President. “Not just for meeting the strict technical standards, but also for our approach to neutral interconnection and willingness to partner with outside, neutral and distributed Internet Exchanges like we do with LINX NoVA here in Virginia. We were the first data center operator to introduce the European ‘style’ Inter Exchange (IX) in the USA and  to announce our partnership with LINX NoVA,. We firmly believe that for our customers to have choice, we cannot tie them to interconnection services only available in our data centers. We are already seeing increased demand for colocation services since LINX NoVA went live inside our facility.”

"EvoSwitch USA joins an elite and growing list of DC OIX-2 data centers in the Northern Virginia Market," said Barry Tishgart, Board Member of the Open-IX Association. "Certification is achieved through a thorough peer-reviewed process, we welcome EvoSwitch USA to the Open-IX standards."

Continuum Data Centers (CDC) is a multi-tenant data center operator in the western Chicago suburbs. The company is currently redeveloping to operate an 80,000 square foot facility in West Chicago. Its CDC 603 data center is expected to open in mid 2014. Its CDC 835 is a 21,000 square foot data center in Lombard, Il. The company, which focuses on colocation just outside of Chicago proper, also stands to benefit from decentralization of exchanges.

“We are extremely excited to receive data center certification from OIX, and eager to participate in the continued growth of the organization,” said Eli D. Scher, CEO of Continuum. “OIX from our perspective is an ideal platform to compel fiber carriers to build into our facility, and to create a transparent and efficient peering environment in our meet me room.” He continued “the fiber density and diversity we are currently building ultimately serves our customers and makes our facility a more integral part of the IT infrastructure landscape.”