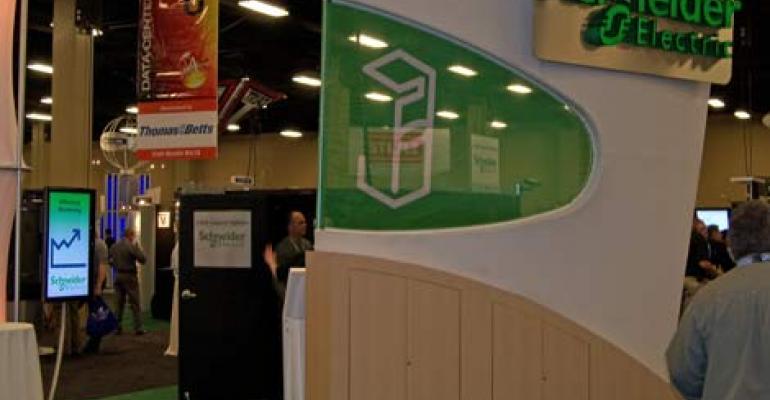 APC by Schneider had a large presence on the expo floor.
Companies>Schneider Electric

Schneider Electric landed a $2.5 million dollar deal with Internap in Secaucus that represents a growing relationship. The company talks about its Data Center Services Team progress after major acquisitions of Lee Technologies and AST Modular.

Schneider Electric launched its Data Center Service Provider Team over a year ago, and the business is humming along nicely. The company recently completed work with long-time customer Internap on its new Secaucus facility. That contract was a $2.5 million hardware-centric deal.

“While Internap has heard our whole story, they’ve chosen us as hardware provider,” said Mike Hagan, Vice President of the North America Data Center Service Provider Team. "Would I love to provide everything? Of course I would. As we worked with them, we learned their business. This is a proactive build, with a compressed time schedule to preserve their capital.” Internap is doing what a lot of mid to large size providers are now doing; the approach is to build the larger building (or shell) and then expand within it incrementally by building out Pods.

Whie the Internap deal was a hardware deal, Schneider is well positioned to offer a broad spectrum of services. The company at large has made some big acquisitions in the form of AST Modular and Lee Technologies, diversifying its product mix. “The big picture is, we’ve had all these divisions as a potential product,” said Mike Hagan. “When we stood the team, we’re now able to approach the customer with a combined single vendor approach.” The world is changing and so are the conversations; Mike Hagan believes his team is ahead of the curve when it comes to addressing this shifting conversation.

“Our message overall, is to go to the customer with the capability to design, build, maintain and manage energy,” said Hagan.

Merging Schneider, AST, and Lee into one organization seems like a massive task, but all indications are that it’s going smoothly. “The best news is that culturally, the companies are very well aligned, which I believe is 80 percent of the battle,” said Hagan. “The corporate change that is new standards, new systems is the only thing that is cumbersome. A lot of the products are technically grasped by sales and we have subject matter experts in each of those industries.“

The company has targeted 12 percent annual growth for its Data Center Service Provider team. Last year, it exceeded that target and is well on pace for 2014, the company says.

In the past, Hagan says the company would receive separate Request For Proposals (RFPs) for individual systems; now, as with Internap, the deals come in one big RFP. “Now we’ve become more of a business planner,” said Hagan. “It’s about lower cost to build, speed to build, and lower operating costs.”

"Whether it’s Schneider or others, the reality is in this niche, more of the decisions are being made by the C-suite because these are financially driven transactions," said Hagan, "but with all the equity money in this space, the stakes are high. As it’s become more competitive, rates are dropping, but equity wants the same return. The C-suite is driving much harder."

Zero One: Schneider Electric Shines the Light on the Internet of Things
Nov 14, 2017