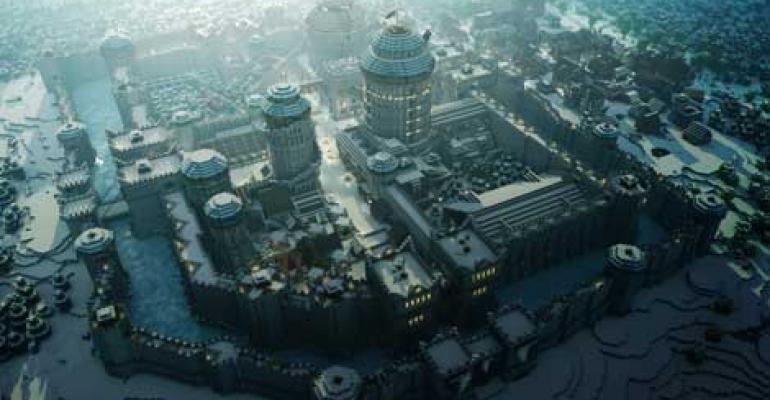 The Stark stronghold of Winterfell as rendered within Minecraft at WesterosCraft.
Cloud

If you just can't get enough of "Game of Thrones" after last night's season 4 premiere, you can immerse yourself in the world of Westeros - inside Minecraft.

If you just can't get enough of "Game of Thrones" after last night's season 4 premiere, you can immerse yourself in the world of Westeros - inside Minecraft.

Hundreds of open source developers are working together to build WesterosCraft, a replica of the world of Game of Thrones within Minecraft. It's a collision of two cultural phenomenons, and it's being hosted on virtual servers at cloud hosting firm Linode.

WesterosCraft is a community of users recreating the entire world within the confines of Minecraft. The projected completion date is the end of 2014. When you look at progress so far, it is astounding, considering I’d have trouble making a table.

Once the world is completed, it will be the virtual landscape for a Game of Thrones roleplaying Game (RPG). Founder and project manager Jacob Granberry needed to find a hosting provider that could handle the potential traffic and high volumes of concurrent users, all contributing to building, and later playing the game.

“Once we took a look at Linode and discovered its many capabilities, we knew we’d found the perfect match and stopped the search,” says Granberry. Linode will handle thousands of users once this is up and running fully. It is a unique project worth keeping an eye on.

Minecraft is an open world sandbox game that is a global phenomenon. While its graphics leave something to be desired upon first entering the world, the ability to create and build is unparalleled. A quick Youtube search for Minecraft reveals that it has evolved into an amazing ecosystem of creations. If you’re not playing Minecraft, chances are your kids are.

Created by Swedish programmer Markus "Notch" Persson, Minecraft has really captured the cultural zeitgeist. It sold into the double-digit millions on Xbox, sold 15 million on PC, and the pocket edition sold over 16.5 million copies. It is huge phenomenon.

Game of Thrones is an HBO fantasy/sci-fi drama that makes dragons even more awesome than they already are. Complex plot, political intrigue, and a complete disregard for the lives of characters (that you’ll undoubtedly fall in love with) has made it a major smash hit.

See a gallery of WesterosCraft progress so far here.