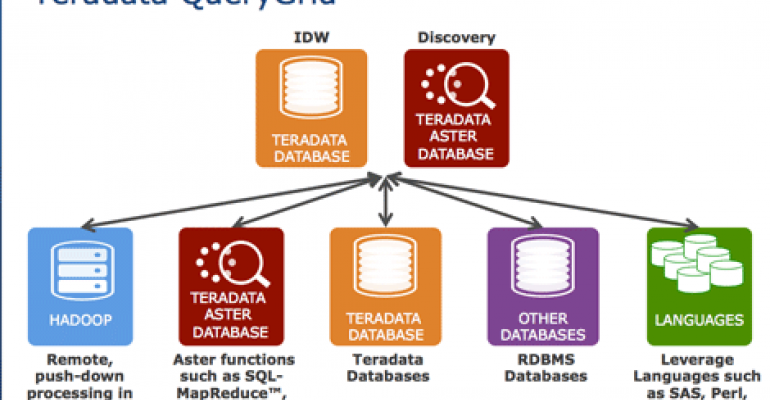 At the Teradata Universe event in Prague, Teradata announced QueryGrid, a cohesive analytic environment for big data with integrated processing within and outside of its Unified Data Architecture.

At the Teradata Universe event in Prague, Teradata (TDC) announced QueryGrid, a cohesive analytic environment for big data with integrated processing within and outside of its Unified Data Architecture. The event conversation can be followed on Twitter hashtag #tduniv.

Teradata QueryGrid provides optimized analytics across the enterprise and beyond. It gives users seamless, self-service access to data and analytic processing across different systems from a single Teradata Database or Aster Database query. Using analytic engines and file systems, QueryGrid concentrates their power on accessing and analyzing data without special tools or IT intervention. In doing this, data movement and duplication is minimized by processing data where it resides.

The aim of Teradata's Aster Discovery platform launched last year was to leverage multiple analytical capabilities. Teradata cited IDC research that showed only 10 percent of organizations have the features and functionality needed to explore data and discover insights. QueryGrid will reach out and integrate with Aster functions such as SQL-MapReduce, graph, Teradata databases, relational databases, and several programming languages such as Perl, Python, R, and Ruby. It will also provide remote, push-down processing in Hadoop by using Apache HIVE as a mechanism to project structure onto data and query it using a SQL-like language called HiveQL.

“Teradata pioneered integration with Hadoop and HCatalog with Aster SQL-H to empower customers to run advanced analytics directly on vast amounts of data stored in Hadoop,” said Ari Zilka, CTO, Hortonworks. “Now they are taking it to the next level with pushdown processing into Hadoop, leveraging the Hive performance improvements from Hortonworks’ Stinger initiative, delivering results at unprecedented speed and scale.”

In a recent blog post, Teradata Labs President Scott Gnau talks about what the company refers to as liquid analytics, or the bi-directional ability to bring analytics to the data or continue sending data to the analytics. Liquid analytic algorithms and systems can help channel the appropriate data to the right part of your analytic architecture, or the right analytics to where the relevant data resides.

“Attempts at federation have been unsuccessful for many reasons. To deliver value from big data, customers should create an architecture that allows the orchestration of analytic processes across parallel databases rather than federated servers. Teradata QueryGrid is the most flexible solution with innovative software that gets the job done,” said Scott Gnau, president, Teradata Labs. “After the user selects an analytic engine and a file system, Teradata software seamlessly orchestrates analytic processing across systems with a single SQL query, without moving the data. In addition, Teradata allows for multiple file systems and engines in the same workload.”

Terdata announced version 15 - the next major release of its database. Queries can be initiated from the Teradata Database to access, filter, and return subsets of data from Hadoop, Aster, and other database environments to the Teradata Database for additional processing. The analysis can incorporate data from the Teradata Database and Hadoop. At its last partner conference Teradata talked about integrating JSON.  JSON (JavaScript Object Notation) is a lightweight data-interchange format that is  a widely used format for the Internet of Things.  With JSON Teradata is able to take multi-structured data and incorporate it into its data warehouse.  JSON enables frictionless data loading and agile, schema-on-read access for extremely fast analytics for the Internet of Things.

All of this big data and analytics is supported by the Teradata Enterprise Data Warehouse 6750 appliance. The EDW 6750 now has 3 times more flash memory, with up to 1.5TB of active memory per cabinet, and 40 SSDs per cabinet. This means that 43 percent more hot data can be kept in SSds. The EDW 6750 uses Intel Xeon processors, and delivers 40 percent more processing power with a total of 12 core processors possible. The appliance has achieved a four-fold energy efficiency improvement compared with 3 years ago.