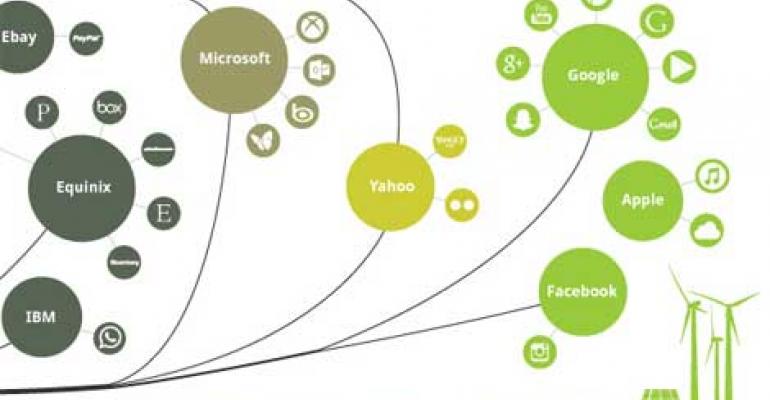 Greenpeace is touting the efforts of Google, Apple and Facebook in both using and promoting green energy. Amazon, as well as wholesale providers Dupont Fabros and Digital Realty (who both house a lot of the top brands) score on the low side.

Apple, Facebook and Google are leading the shift to a greener Internet, according to a new report from Greenpeace that examines the use of renewable power in cloud computing. All three companies are working to power their data center operations with 100 percent renewable energy. Earning lower marks is Amazon Web Services, which currently sources just 15 percent of its electricity demand with clean energy.

Amazon scored low marks, as did wholesale data center providers Dupont Fabros Technology and Digital Realty, which all lost points for lack of transparency about their energy sourcing.

The Greenpeace reports examines a single component of sustainability, focusing on the use of electricity from renewable sources rather than coal or nuclear energy (which Greenpeace opposes). The data center industry has historically focused on energy efficiency measures that reduce the volume of electricity consumed.

The three companies with the highest rankings from Greenpeace have all made very public moves to make their operations greener, but also to raise the profile of green energy in the industry as a whole.

“Apple, Facebook and Google are powering our online lives with clean energy, and building a greener offline world for everyone in the process,” said Gary Cook, Greenpeace Senior IT Analyst. “These companies have proven over the past 24 months that wind and solar energy are ready and waiting to power the internet, and the rest of our economy, with clean electricity.”

The report examines 19 leading internet companies, surveying their electricity supply chains of over 200 data centers. Five of these companies have committed to going 100 percent renewable.

Apple hit the 100 percent renewable energy mark for its data centers roughly a year ago. This followed sustained pressure on the part of Greenpeace for Apple to set an example in the tech community. Apple has continued its green ways, operating the largest privately owned solar installation in the US at its North Carolina data center, which also contributed to its high ranking.

“Apple’s rapid shift to renewable energy over the past 24 months has made it clear why it’s one of the world’s most innovative and popular companies,” Cook said. “By continuing to buy dirty energy, Amazon Web Services not only can’t seem to keep up with Apple, but is dragging much of the Internet down with it.”

Google’s the king of power purchase agreements for wind energy, for example, it recently bought even more wind power for its Finnish Data Center.

Amazon Web Services looks to be a potential next focal point for Greenpeace.  The company received an "F" for transparency, policy and advocacy. Only two AWS regions - Oregon (US-West) and AWS GovCloud (US) - currently offer 100 percent renewable energy options. Coal powers 28 percent of the company’s cloud, with nuclear as 27 percent, and gas as 25 percent.

Good transparency kept Equinix out of the category and in the “middle of the road.” Several brands evaluated that ranked higher use Equinix or have made 100 percent renewable commitments, so the report suggests that its important place in the digital economy might be a motivating factor to make big public moves and commitments to green.

Also in the middle was eBay, which has promoted data center efficiency via its DSE dashboard as well as has taken several steps to committing to green energy. Rackspace was also evaluated to be in the middle of the pack, though the company committed to becoming renewably powered back in 2012 and is on its way.

Data Centers as Instruments of Change

One takeaway is that large brands have the power to change the power grid. Greenpeace wants large utility customers like Facebook to use their leverage to institute changes beyond their own infrastructure, influencing utility companies to provide more renewable options.

In the best example of this to date, Google has helped nudge Duke Energy, the largest utility in the US, to offer a new renewable energy rate plan for large electricity buyers in North Carolina.