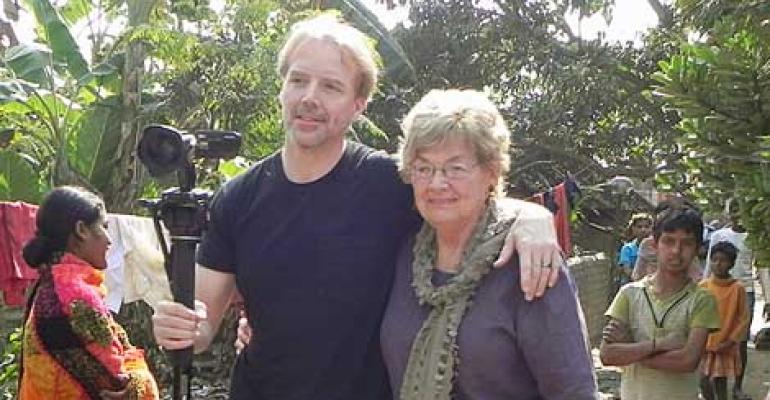 eBay executive Dean Nelson and his mother Sandy during a visit to Calcutta. The pair founded the Just Let Me Learn Foundation to build schools for impoverished children in India.
Business

Dean Nelson Teams With Mom to Build Schools in India

Data center executive Dean Nelson has teamed with his mother Sandy to build schools for impoverished children in the mountain villages of India.

Dean Nelson has built some of the world's most advanced data centers. His newest project presents a very different type of challenge: building new schools for impoverished children in the mountain villages of India.

It's a labor of love Nelson has undertaken with his mother, Sandy, who accompanied him on a 2007 trip to India, when he was working on the data center team at Sun Microsystems.

"What happened on that trip really changed our lives," said Nelson. "We met some incredibly selfless people who were helping kids in poverty by getting them access to education. We met the children, played with them, listened to their needs, and heard their parents beg us to help educate their children."

Together the Nelsons formed the Just Let Me Learn Foundation, which has just launched a crowdfunding campaign on Indiegogo to support the construction of a new school in Sesawng, India. They are seeking to raise a total of $149,000 to fund a school campus where up to educate up to 750 children in this remote village, which had never had any organized education.

The foundation has already purchased two school buses for children in Patna, created a tutoring center in Chandouli in Utter Pradesh, and is nearing completion of its first school project in Saiphai. The group's latest project addresses a dire need in Sesawng, a mountain village where many of the families migrated from remote villages in other countries (including Nepal and Bangladesh) and don't even have birth certificates.

The Sesawng school project is also the focus of the first fundraising effort for GEEKS Giving Back, a new organization focused on connecting the data center community with philanthropic causes. GEEKS Giving Back is headed by Maricel Cerruti, the Director of Marketing at data center firm Teledata and founder of the Technology Convergence Conference held each year in Silicon Valley.

The group will kick off its efforts Thursday, April 3 with a Casino Night Fundraising event from 5:30 to 9 pm at the SanDisk Facility in Milpitas, Calif. The event will feature one-on-one speed networking with data center industry executives, followed by casino games like Black Jack, roulette and poker. All of the proceeds will go to support the construction of the school in Sesawng.

"There's a lot of really giving people in this industry who are doing things very much like this," said Nelson. "I see a bright future in what she's putting together."

Nelson, the Vice President for Global Foundation Services at eBay, is passionate about efficiency and sustainability. The trip to India energized his mom, Sandy,

"It fundamentally changed her," said Dean Nelson. "She saw their need. Next thing you know, she said 'I want to build a school.'" Unbeknownst to her son, Sandy Nelson donated a substantial portion of her business income to the first school project.

Check out the Indiegogo campaign for details. Here's a video in which Dean Nelson provides an overview of the project: