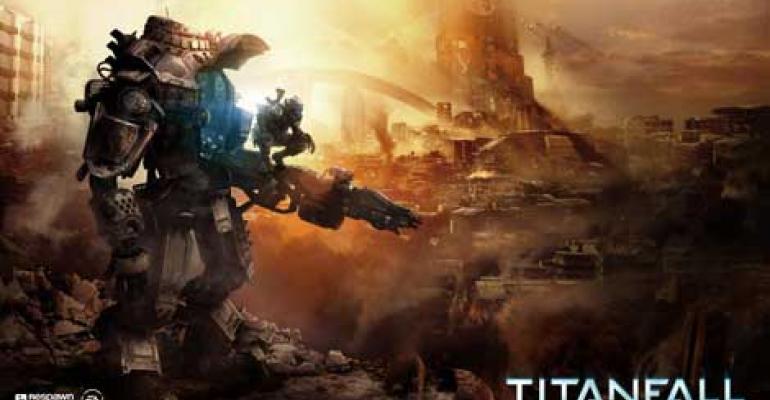 Cloud infrastructure has been well tested for enterprise workloads. But can it handle the demands of gamers, who are ultra-sensitive to network lag? Behold Titanfall, running on the Microsoft Windows Azure cloud.

Cloud infrastructure has been well tested for enterprise workloads. But can it handle the demands of gamers, who are ultra-sensitive toi network lag? The question is being tested with the release of the new Titanfall game by Respawn Entertainment for the Xbox One, which is leveraging the Microsoft Windows Azure cloud.

Before going live recently, Titanfall had extensive beta testing last year, with Azure serving the back-end hosting of dedicated servers for game hosting and CPU power. Before taking over as Microsoft CEO recently, Satya Nadella was EVP of Microsoft’s Cloud and Enterprise group and would typically reserve cloud capacity for business applications.

With the new Xbox One debut, the company has opened up Azure to let designers create gaming experiences. When Xbox One was launched last year the company updated Xbox Live as well, with 300,000 servers backing up the service. While other online games have stumbled in their online endurance tests, Microsoft has been building its server infrastructure.

Respawn engineer Jon Shiring said that since the beta ended, some skeptical devs have already changed their minds about the feasibility of using Azure for the parts of a game traditionally handled by a user's console or PC.

"Back when we started talking to Microsoft about it, everyone thought it was kind of crazy and a lot of other publishers were terrified of even doing it," Shiring says. "I've heard that since our beta ended, they've been pounding down the doors at Microsoft because they're realizing that it really is a real thing right now."

Last summer Shiring blogged about the Xbox Live cloud and why dedicated cloud servers were selected for their common multiplayer design. Typically games will have user computers host multiplayer matches, because it is too cost-prohibitive to scale hundreds of thousands of cloud servers. When small gaming company Respawn approached Microsoft with the challenge of making dedicated cloud instances affordable, they realized that player-hosted servers were holding back online gaming and that this was something they could help solve.

Shiring notes that the Xbox group came back to them with a way  to run all of the Titanfall dedicated servers, which lets Respawn push games with more server CPU and higher bandwidth, which lets them have a bigger world, more physics, lots of AI, and potentially even more.

Engadget notes that many gamers look at Titanfall as the first true next-generation game, offering an experience we haven't seen on last-generation hardware (think: the PlayStation 3 and Xbox 360). From what Shiring says, the fact that Respawn wasn't held back by a console's local processing power was key to the studio's achievement.

"There are other games like Battlefield that have dedicated servers, but they haven't gone the same direction that we have with them. We have all of this AI and things flying around in the world; that has obviously let us build a different game than we would have if we'd have gone with player-hosted," Shiring says. "Really, the biggest thing with that is that it has uncapped our designers and let them do things that were previously impossible to do."

Regional data centers allow Respawn to keep everyone playing even if their closest server farm is overloaded. During the beta, the studio ran Titanfall on an intentionally limited number of servers to discover where the infrastructure's weak points were when running at a full load. Some 2 million people participated in the game's test run (across both PC and Xbox One) and at one point, a portion of Europe's data centers were running at full player capacity and couldn't accept more users.

Titanfall went live exclusively on Xbox One on March 13 in North America, in the UK on March 14.

“At Xbox we have a long history of bringing blockbuster multiplayer games to our fans that have redefined what it means to play games with friends and others around the world,” said Yusuf Mehdi, Chief Marketing and Strategy Officer, Devices and Studios at Microsoft. “Leveraging the power of Xbox One and in close collaboration with our partners at Respawn Entertainment and Electronic Arts, Titanfall is poised to be one of those breakthrough games that ignites the potential of this generation.”