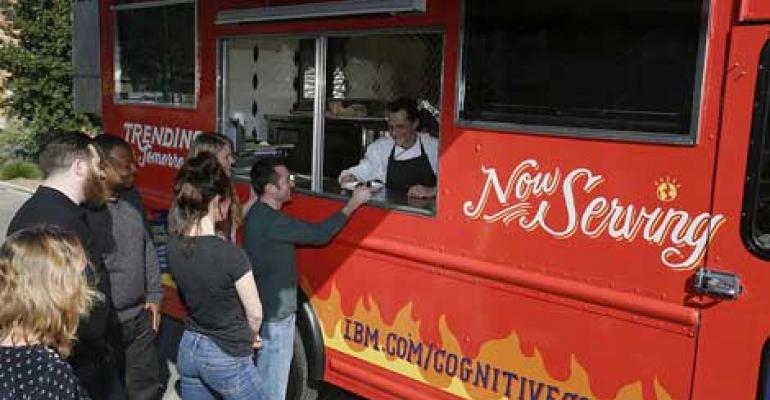 IBM and the Institute of Culinary Education (ICE) have a foodtruck at SXSW that is using Watson to turn tweets into creative dishes. 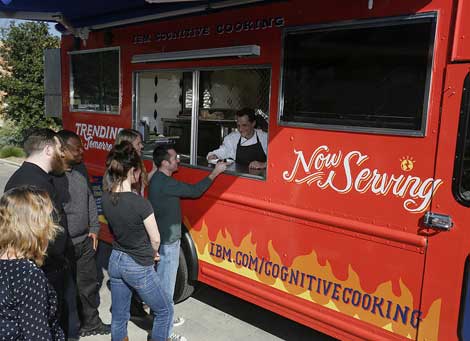 At the SXSW festival in Austin, diners line up to taste dishes developed by IBM's Watson supercomputer. (Photo: IBM Research via Flickr)

At this year’s SXSW festival in Austin, IBM and the Institute of Culinary Education (ICE) have teamed up on a food truck, with IBM's Watson supercomputer acting as a cloud based cognitive cooking system to help chefs come up with creative menus. For example, today’s dish is Vietnamese Apple Kebab, which sounds both amazing and like something you’d never dream of coming up with.

Based on tweets for suggested potential dishes for the food truck’s menu each day, the ICE chefs and IBM researchers are tapping into this system to take the top trending ideas and turn them into dishes.

There is a huge catalog of possible food combinations, and Watson analyses this big data stored in an IBM cloud. This goes beyond searching a list of recipes, and looking deeper into how food ingredients potentially play with one another, possibly leading to some very creative dishes. After Watson does a little creative work, the chefs get to cooking. Dystopian futures of machines driving the creativity and humans doing the menial tasks are just around the corner.

In all seriousness, Watson is acting as the perfect cooking tool, helping the chefs gain data-driven insight into ingredient pairings. It’s on a level that basic experience can only begin to touch upon.  As the IBM website proclaims, computing has always made us more efficient, now it’s making us more creative.

The idea is a fun one, displaying one potential creative use for the power under Watson’s hood. It’s also a great PR move on the part of IBM, demonstrating the creative side of what most people know as the machine that beat Ken Jennings on Jeopardy. It introduces cognitive computing to a wider, savvy audience. There are numerous applications in retail, healthcare and beyond, where thinking computers are partnering with people.