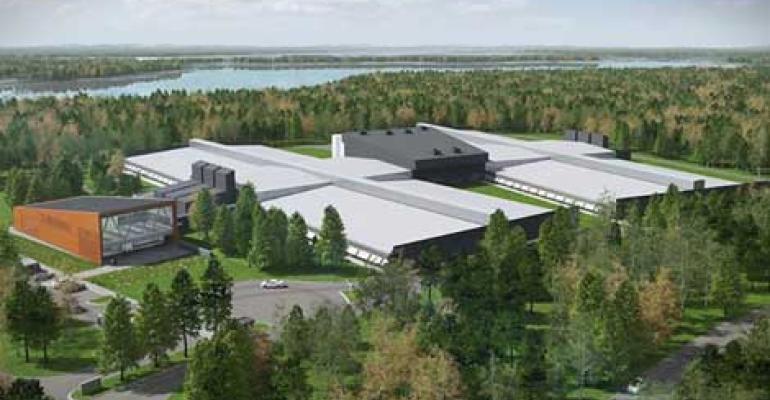 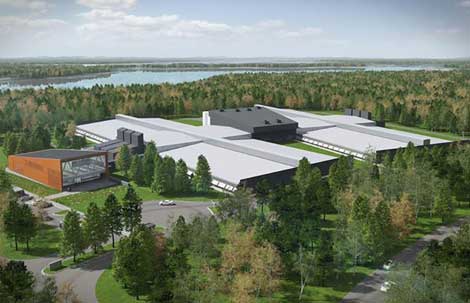 An illustration of Facebook's new data center design and what it will look like in its first implementation in Luela, Sweden. Click the image for a larger view. (Image: Facebook)

Facebook has begun building a second huge server farm in Lulea, Sweden, and has totally reworked its data center design for the project. The new building will span 25,000 square meters (270,000 square feet) and will combine factory-built components with lean construction techniques.

Significantly, it will also eliminate Facebook's distinctive penthouse cooling system, which uses the entire second story of the building to process fresh air to cool its servers.

The new approach to data center construction, which Data Center Knowledge described in detail last month, is known as a Rapid Deployment Data Center or RDDC. Facebook says this new approach will be more efficient, use less material and be faster to deploy.

"Just as the great Swedish company Ikea revolutionized how furniture is designed and built, we hope that Luleå 2 will become a model for the next generation of data centers," Facebook said in its announcement of its Lulea expansion.

"We expect this new approach to data center design will enable us to construct and deploy new capacity twice as fast as our previous approach," Facebook's Marco Magarelli said in a blog post at the Open Compute Project. "We also believe it will prove to be much more site-agnostic and will greatly reduce the amount of material used in the construction. Our newly announced second building at our Luleå, Sweden, campus will be the first Facebook data center to be built to our RDDC design."

In a session at the recent Open Compute Summit, Magarelli discussed two new design concepts that Facebook has developed for future facilities. One involves using as a modular "chassis" approach to construction, shipping large pre-fabricated building blocks that can be rapidly put together, much like Legos, to create a building. The second design focuses on the use of IKEA-style kits filled with lightweight parts that can be assembled on-site to create rows of racks and ducting inside a data hall.

Magarelli writes that the design initiative began in Facebook's labs in October 2012.

"The first idea developed during the hack was employing pre-assembled steel frames 12 feet in width and 40 feet in length," Magarelli wrotes. "This is similar in concept to basing the assembly of a car on a chassis: build the frame, and then attach components to it on an assembly line. In this model, cable trays, power busways, containment panels, and even lighting are pre-installed in a factory."

"The second concept developed during the hack was inspired by the flat-pack assemblies made famous by Ikea. Our previous data center designs have called for a high capacity roof structure that carries the weight of all our distribution and our cooling penthouse; this type of construction requires a lot of work on lifts and assembly on site. Instead, as Ikea has done by packing all the components of a bookcase efficiently into one flat box, we sought to develop a concept where the walls of a data center would be panelized and could fit into standard modules that would be easily transportable to a site.

"In this scheme, we employ standard building products like metal studs and preassembled unitized containment panels that are then erected onsite and are fully self-supporting. These panels are limited to a width of 8 feet to maximize the amount of material that can be shipped on a flatbed trailer without requiring special permits for wide loads."